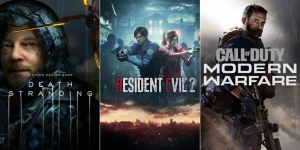 It was another relatively strong year for games this time around, but it is nothing compared to the blockbuster year games had in 2018. I mean last year we had the iconic Red Dead Redemption 2 in which you play as outlaw Arthur Morgan and his merry band of misfits who somehow want to try to evade the law while thriving in their way of life. The Game of the Year, God of War which was a soft reboot following the journey of Kratos and his son Atreus. We had the beautifully choreographed and designed Celeste which held its own against these gigantic games last year despite being an indie game. Speaking of gigantic games, we saw another entry in the Assassin’s Creed franchise, Assassin’s Creed Odyssey takes you deep into the lives of two mercenaries making their way in the Greek era of expansion. Moreover we had Spiderman last year which was a ground-breaking game in the superhero genre of gaming.

In 2019, we have also seen a lot of improvements in gaming gadgets such as gaming chair and gaming desks. Developers, in particular, deserve a special tribute for creating engaging themes and characters that inspired and comforted every person who picked up the controller. But that being aside let’s jump into the best overall game releases this year.

Death stranding is a PS4 exclusive game directed by visionary director Hideo Kojima. The game was first announced at E3 2016 and after a series of cryptic trailers which left more questions than answers we found ourselves awestruck on 8th November when we all got our hands on this game.

This is the most visually advanced game in this console generation hands down while boasting an addictive cycle of gameplay in the form of inventory management and traversing the landscape. The main threats in this game involve spectral supernatural things called BTs or beached things which are in a state of purgatory in a manner of speaking.

All of this can be expected from the man who brought us the infamous metal gear solid franchise which defined the previous generation of consoles and gaming in general.

Resident evil 2 remake hit the shelves in early 2019 and it smashed every expectation out of the park with its new and improved gameplay and user interface which enhanced the experience all the more for returning veterans who picked this game up back in 1998 when it was released for the PS1.

The best thing about this game is that it keeps the soul of the original game will giving it a modern twist which helps it stand amongst the best of this year and the best at still making us scared to the point of Goosebumps.

Capcom has affirmatively set the bar for all future incoming remakes and remasters.

Sekiro is the latest entry into the soulsborne franchise of gaming by the studio FromSoftware. It was released on the PS4, Xbox One and PC spring 2019.

The game features an added degree of challenge as it is the hardest game in amongst the soulsborne franchise. The gameplay features you being an undying shinobi who has the quest to protect his master whose blood is being sought out by the lord of the land who wants to preserve his motherland by using the Blood of the Dragon which courses through the veins of our young master.

The fast-paced action relies on cat like reflexes to time dodges and deflect enemy attacks at the precise moment. The difficulty of the game garnered it some unwanted flak from casual gamers and journalists alike who all called upon for an “easy mode”.

Devil may cry 5 sees you play as acclaimed demon hunter Dante, Nero and the mysterious V who all have he common goal to stop Urizen the demon who sees to erase all life by consuming the Qliphoth fruit.

Modern warfare is the series return to is roots after a long time as games before this lacked the mettle to take up to the mantle of the call of duty games known for their gritty and controversial stories and online multiplayer fun which is unparalleled.

Modern warfare was released of 25th October to widespread critical praise for its new and improved game engine as well as a return to a grittier story with its fair share of controversial moments.

The online multiplayer is fun as it was a decade ago and is a real nostalgia hit for those who picked up this game back in 2009. This “soft reboot” acts as a prequel setting up the events for the original modern warfare game.

So this is what this year had to offer us and many more games were up to par too but these games stood out because of overall appeal, hype and critical acclaim alike.

Important Features Of Software For A Small Business

How To Earn Profit From Bestselling Video Game Consoles?