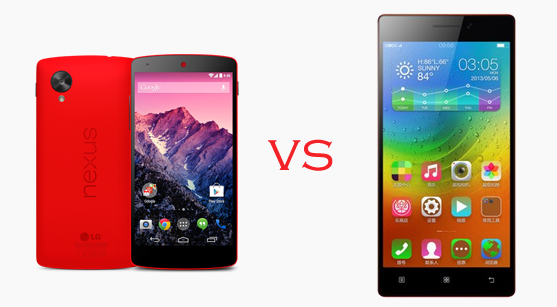 The Lenovo Vibe X2 has been successful in creating a buzz in the Indian smartphone market with its high end hardware specifications and features, being offered at an affordable price tag. The Lenovo Vibe X2 is a powerful Android smartphone, which has been launched with a strategic price tag of Rs.19,999 in India. At this price tag, the Lenovo Vibe X2 offers a tough rivalry to the Huawei Honor 6, HTC Desire 816G, Samsung Galaxy S5 Mini and Google Nexus 5.

If you are planning to buy a mid-budget Android smartphone, and are confused between Lenovo Vibe X2 and Google Nexus 5, here, we bring you a one-on-one comparison review between them. This would help you decide, which one is better.

The Nexus 5 sports a comparatively better display in terms of performance, also featuring the tough Corning Gorilla Glass 3 protection, which is missing on the Lenovo Vibe X2.

Both Lenovo Vibe X2 and Google Nexus 5 are powerful Android smartphones, which could easily offer you an unmatched smartphone experience. Beneath its sleek and stylish body, the Lenovo Vibe X2 houses a 2GHz MediaTek True8Core Processor supported with 2GB RAM and PowerVR G600 GPU.

On the other hand, the Nexus 5 is powered by a Qualcomm Snapdragon 800, Quad-Core Processor clocked at 2.3GHz, supported by 2GB RAM and Adreno 330 GPU.

The Lenovo Vibe X2 and Google Nexus 5runs on Google Android 4.4 KitKat OS, which packs various new features and app support. The Google Nexus 5 is slated to receive Android 5.0 Lollipop update very soon. Whereas, there is no official report for any type of an OS upgrade on Lenovo Vibe X2.

The connectivity features on both Lenovo Vibe X2 and Google Nexus 5 are almost same, which includes-

In this comparison test, we found that both Lenovo Vibe X2 and Google Nexus 5 are powerful Android smartphones, which can stand 100% upon your expectations. If we compare the hardware configuration of these smartphones, we can easily come to a point which says that the Lenovo Vibe X2 is better than the Nexus 5 in terms of processor, camera and battery. However, the software support and display is better on the Google Nexus 5.

Author Bio : The Author have great interest in writing article on Technology and Handset reviews, currently he is working with 91mobiles.

Why Are Infographics So Shareable?