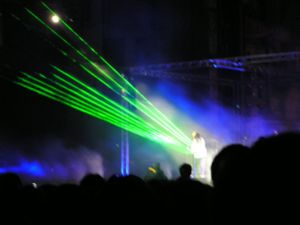 We’ve all seen the magic that laser technology has brought to the world – who can forget some of the best light shows of all time and Jean Michel Jarre’s laser harp?  What about Orbitaland the brilliant laser light shows they put on that are an integral part of their performance – putting the magic into Glastonbury year after year.  Lasers are cool, that much is totally obvious.  However, laser technology really is beyond cool – lasers are not just for fun, lasers are used by the military for marking targets and guiding munitions, they’re used in industry for cutting and welding materials during fabrication processes.  Coolest of all, lasers are used in medicine in some really innovative ways.

Not Just for Fun

‘Bloodless surgery’, as it’s known, is the use of laser scalpels for minimally invasive surgical techniques.  With a low risk of post-operative infection and much faster recovery rates (with patients being discharged from hospitals earlier), laser surgery can also be a more cost effective option for hospitals.

Lasers are being used increasingly to treat skin conditions.  Laser resurfacing removes layers of skin making it look younger and healthier – it’s been a boon to those with scarring, whether from accidents or acne – treatment can boost self confidence and really change a person’s life.

The Laser uses in industry are far and wide from laser cutting tooling machines to laser cutting metal and wood by companies like Garcross. Many students and designers use laser technology to their advantage and creating ground breaking pieces of art and design using this increasingly cost effective technology.

Now you See it, Now you don’t

Lasers can also used for hair removal and tattoo removal.  There are many beauty salons offering laser hair removal, suggesting that the hair is permanently removed after as few as three sessions.  As for tattoo removal, this really is purely cosmetic and removal has been successful in so many cases.  Surprisingly with tattoos, it’s the black lines that are easier to remove, rather than the lighter coloured lines.  Cosmetic laser procedures which were once prohibitively expensive are becoming much more affordable as laser technology develops into a tried and tested method.

Laser eye treatment has become almost the norm over the past decade and is commonly used to treat all manner of eye conditions nowadays.  The procedures have become so easy that it’s said that it’s possible to have laser eye surgery during one’s lunch break and go back into work afterwards!

However, the coolest use of lasers has to be in surgery and cancer treatments – lasers are used to remove traces of malignant tissue following the surgical removal of tumours.

Laser technology is still pretty new and we’re sure to see more and more exciting developments as more research is carried out and lasers become more common in hospitals and surgeries worldwide.