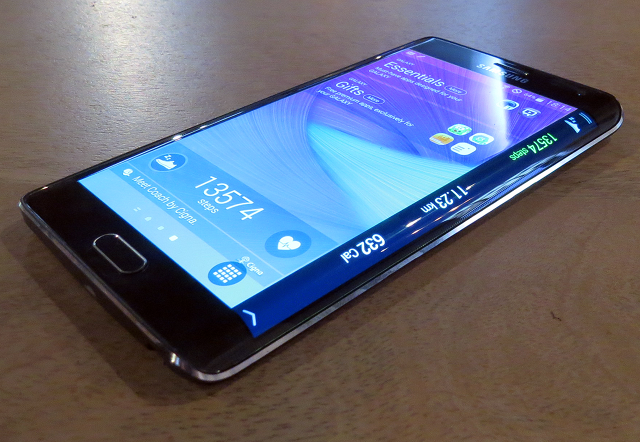 After Samsung Galaxy Alpha we get the second smartphone throughout the year (2014), providing a unique feature that can appear in many models in the future. Unlike the Galaxy Round or LG G Flex, curved display provides a number of advantages, not only visually different – of course, if Samsung can exploit the potential. Here we are referring to Galaxy Note Edge.

Samsung Note Edge is the very first device form the Samsung to feature such display but in the current state only a few scenarios benefit from the side of the display, for example, the camera application, night mode, or more of the available panels; will be useful and digital line. In some cases, a separate display does not give advantages – too often Samsung tries to emphasize, but also for the reason that not all applications are able to use it. In the future the number of applications will increase for sure and so its functionality.

If we specifically talk about Side screen – not just a beautiful addition, but its potential is yet to be discovered. But also from Samsung takes a lot of effort. The software in some places is “raw”, this also applies to slowdown and display error. It will be interesting to see whether future Android updates is better to use the side screen. Yet offset the lower panel with labels and status bar cause such a need.

But the criticism should not obscure the fact that the Galaxy Note Edge – very good Phablet because it is based on the powerful and proven platform. System on chip, provides high enough margin of performance, battery – a decent battery life, and the camera – one of the best smartphones. In addition, we get a highly successful S Pen stylus with a set of related applications, additional functions as a pulse sensor and fingerprint, fast charging, an infrared transmitter that allows you to turn a smartphone into a remote control. Note the traditional strengths of Samsung in the form of a removable battery and memory expansion capabilities.

The Samsung Galaxy Note Edge Phablet proved to be inadequate, especially as the price is very high. In the current state of the side screen does not provide such benefits that justify the additional charge as compared to the Galaxy Note 4. You will have to pay 899 euros for the Galaxy Edge, and the Premium version with cover and the memory card is worth even more. And in future if Samsung releases the Galaxy Note Edge 2, we can expect an optimized and better phablet. However, other competitor like HTC would also get ready with their next beast, for example the HTC One M10, that you can expect early next year.

A Portrait of the Modern Smartphone User

What Is Secret Behind More Efficient And Responsive Web Design?