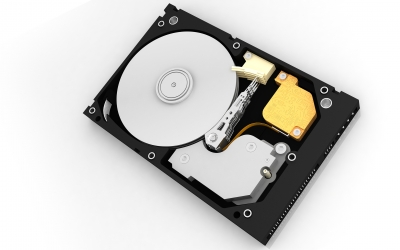 The hard disk drive has ruled as the king of secondary storage since the 1960s, beating tape reels and punch cards. At the time, it was the latest and greatest storage technology out there, able to access information non-sequentially and, over time, reducing its form factor and increasing its storage density so much that it’s hard to imagine any other storage tech beating it. But that’s where solid state storage comes in. Faced with the increasing viability of solid state arrays, many businesses have to face the difficult decision of whether to ditch the hard drive in favor of solid state storage.

The most obvious benefit of hard disks is their ability to store massive amounts of data. A single drive can now store up to 4 TB of information, while the largest consumer SSD is only one-quarter of that. The price of hard disk storage is incredibly low, especially when you consider its fantastic storage density. A 4 TB hard drive can cost up to $400 while a 1 TB enterprise solid state drive can cost up to $7,000.

Hard drives have their faults, though. Though they can access data non-sequentially, they sacrifice much of their performance to do so. They’re mechanical devices, storing information on spinning disks, so accessing information stored in different locations on each platter slows access time to a crawl. They’re also susceptible to physical trauma, including shocks, extreme temperatures and changes in air pressure. Additionally, if any dust particles, no matter how small, enter a hard drive it will fail.

The SSD is the undisputed champion of speed. That’s what attracts many companies in the beginning. SSDs can access information up to 100 times faster than hard disks and they excel equally in sequential and non-sequential reads and writes. If all other factors were equal, there’d be no debate as to which technology would be the storage scheme of choice for the next decade. But flash comes with a few caveats. First, it has a limited lifecycle, which we’ll explore in more detail later. Second, the price per physical gigabyte is massive, especially when compared to hard drives.

There are ways to lower the cost, though. By employing deduplication, compression, pattern removal and thin provisioning, flash arrays can reduce the physical size of the data stored by up to 10 times while maintaining the integrity of the logical data. That means that a flash array with a 5.5 TB physical capacity can potentially store up to 55 TB of data, bringing the cost per gigabyte down to levels comparable to hard drives.

It’s true that every solid state drive has a limited life cycle. While hard drives can last up to 7 years without failing, solid state storage has a slightly different lifecycle. Hard drives rely on mechanical parts and most crashes are due to mechanical failures. Solid state drives, on the other hand, have finite limits on how many times individual storage blocks can write data. Most enterprise solid state drives can handle around 100,000 writes to each block before a drive fails. This would be a cause for concern if a company used individual drives, but because most businesses with in-house servers store data on SANs or NASs, each drive in the array can share the wear, while the array controllers can enact further wear leveling management, giving many flash arrays lifespans comparable to hard disk storage methods.

Solid state storage isn’t perfect by any means. Individual drives are more expensive than hard disk drives and the technology is newer, so fewer companies have experience working with it. That doesn’t mean you should write it off, though. By utilizing its strengths and mitigating its weaknesses, solid state memory can blow hard drives away, even in cost comparisons. When you add in the amazing feats of speed flash drives can produce, it’s really not a question of if you’ll migrate to solid state, but when.

Considering A Career In Welding?

Make The Most Out Of Your Business Now With AV Companies