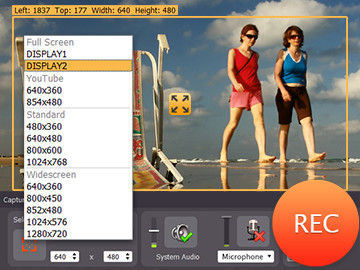 Movavi Screen Capture Studio is a screen recorder that can be used to capture all formats of videos on the web. Nowadays, many people like to watch movies online on their computer screen. There are lesser and lesser people that watch movies on their television set.

If you frequently watch movies on your computer monitor, you might want to get a screen recorder and record it so that you can watch it any time at home. It professionally captures the video in the same quality as the video being played at the web video player.

You must click on the red focus button under Select Capture Area and then click on the video player to set the recording frame over it. You should choose full screen if you want the screen capture software to capture the entire screen.

If you also want to capture sound in the movie, make sure you don’t forget to check System Audio and drag the volume slider up to record the movie sound clearly. The 5 seconds countdown timer will pop up when you click the REC button. You can wait until it reach 1 or 0 before clicking on the play button in the video player. Get more details at www.movavi.com/support/how-to/how-to-capture-video-from-site.html .

If the video is too long, you should divide the screencast recording into several sessions. For example, if the video lasts for 3 hours, you can record the video in 3 sessions with each last for 1 hour. In this way, you don’t have to stay in front of your computer for 3 hours to monitor it. If you prefer not to monitor the video recording, you can set the timer to stop exactly at the time when the video stops playing.

Screencast video can easily take up a lot of disk space so you want to make sure your hard disk has a lot of free space before you start recording. On the control panel, you will see recorded and left on disk. Recorded shows the size of the video that is being recorded up to that point in real time.

A Few Reasons to Do Your Taxes Online This Year

iPad Vs iPad Mini- Which One Is Better?

Health Insurance During and After College