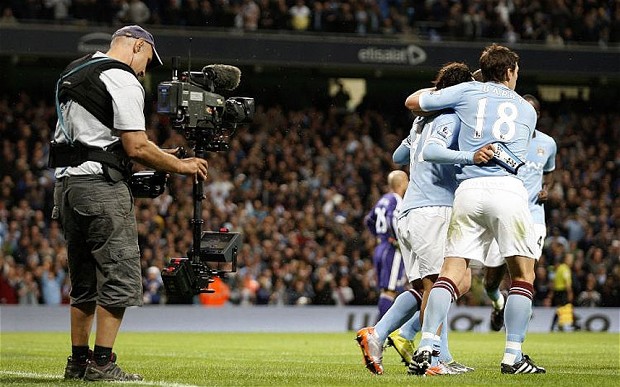 Not long ago televised football paled in comparison to actually attending the event. Coverage wasn’t the best, nor were the on-field cameras. A few decades ago televisions were just starting to make real progress with the display.

But now the opposite can be argued. In many ways watching the game on television is now better than being there in person. So much so, stadiums have their own giant displays to provide televised coverage as the action happens on the field. Tailgaters bring televisions and watch games in the parking lot instead of going in the stadium.

Technology is bounding forward and bringing us our favorite games in entirely new ways. While 3D hasn’t really panned out in sports entertainment, plenty of other entertainment system features have seriously improved the viewing experience.

The improved technological components allow for slimmer and slimmer TV designs. As a result they are lighter even as the screens get bigger. Flat screens can be mounted virtually anywhere and moved relatively easy so that the entertainment goes with you.

First there was 780p, then there was 1080p. Now there’s 4K resolution. Most high-end and large televisions are beginning to be built with this ultra high definition. The sports action is going to be so crisp and clear that TV viewers will be able to make calls better than the refs.

TVs can be fined tuned to a person’s viewing preference using an ever-growing list of picture settings. The overall quality is significantly influenced by the settings you choose chief among them being the contrast/gamma, brightness/backlight, picture mode and edge enhancement/sharpness.

Curved television screens were made for sports. It gives a sense of immersion and being in the oval-shaped stadium. For all over viewing the jury is still out on curved screens.

Some viewers will agree that sound is just as important, if not more, than the picture. But getting theater quality sound used to require complex, wired systems that had to be strategically thought out. Thanks to amazing strides in wireless technology speakers can now go anywhere you need them without much hassle. For superior sound at the best value a 5:1 system in recommended (5 speakers with 1 subwoofer).

If you’re looking for the most affordable upgrade for your audio system a sound bar is a popular solution. A sound bar packs three speakers into one long flat component that sits in front of the flat screen. Consumer Reports notes that sound bars start as low as $100 but full-featured models with additional speakers can run up to $1,000+.

Instead of having to deal with a drawer full of remotes, get yourself a universal remote that controls everything. Remotes with keyboards are especially convenient when searching on demand or streaming.

Sports may be more expensive but not entertainment systems. Huge flat screen TVs are cheaper than ever before, which means you have more money to spend on game night get togethers. Even 4K televisions are beginning to come down in price dramatically as the technology becomes more common.

Mobile is Adding Another Screen to the Game

No matter where you are the game is there with you, if you have a smart phone or tablet. Mobile devices make it possible to view on the go and keep up with all of the sport news and stats.

Internet media consumption has become so huge in recent years that major players are creating content solely for this market. A few examples include ESPN’s app and Direct TV NFL Sunday Ticket, which streams out-of-market games to mobile devices. A smart TV can even sync with your device to play the additional coverage on the big screen. If your TV isn’t “smart,” an HDMI media streamer can easily bridge the gap.

At home, on the go and in the stadium – watching sports on screen has never been more entertaining than it is today thanks to technology.

The Undeniable Benefits Of Hydration For Students