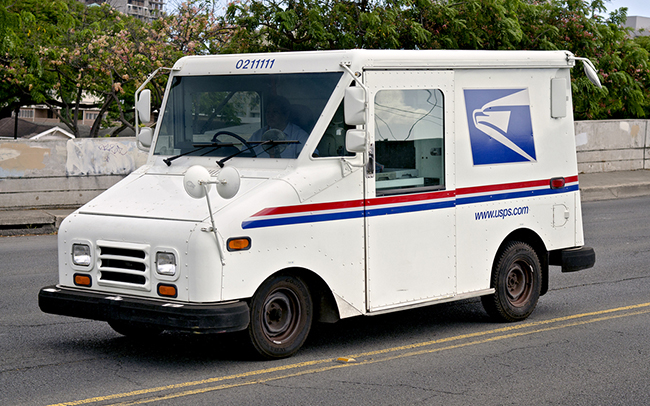 The iconic, boxy and popular USPS trucks that you see driving down the street and delivering mail each day have a long history that’s actually rather interesting when you take a closer look. These trucks are actually called the USPS Long Life Vehicle (LLV). They were created to last long and be reliable, so that the USPS could deliver mail unabated for years to come. What follows are some interesting factoids that most people don’t know about their local mail delivery truck.

In the early 80s, USPS challenged Grumman, General Motors, Poveco and American Motors to create a reliable and long-lasting mail delivery truck. It would be a few of years of testing before Grumman ultimately won the contract. The cars were subjected to horrific tests that would destroy most vehicles. But the Grumman LLV won the tests and was awarded the title of Long Life Vehicle; and the lucrative USPS contract for building them.

They Move Over Half a Billion Pieces of Mail Daily

The LLVs comprise a vast majority of the USPS’ fleet of mail delivery trucks. But they are tasked with delivering over 523,000,000 pieces of mail each day. That’s half a billion pieces of mail that would not be delivered each day if these vehicles were not reliable and sturdy.

LLVs Comprise 74% of All USPS Trucks

When we said that they comprise a vast majority of the USPS fleet, we were not kidding. Over 74% of all USPS’ trucks are these vehicles. They mostly like to hang out in the city, where they are tasked with delivering the mail from box to box, day in and day out, whether it’s raining, snowing or sunny outside.

The USPS Long Life Vehicle is so popular, in fact, for the mail delivery service that it comprises over 60% of the fleet mileage for the service. This is even while counting the big rig trucks that they use. No wonder they needed a vehicle that would last so long. Seems like USPS really thought things through when they set out to create these iconic and boxy trucks.

As you can imagine, the USPS spends a lot of money on gas. Telling of how popular their long life vehicles are, you can bet that they spend millions at the pump each day. In fact, over 57% of their entire annual fuel expenditures are spent on just these vehicles.

Stop-and-Go is the Nature of the Truck

The average USPS truck stops a lot. In fact, it’s stopped for a good portion of its six-hour route, only driving a small portion in between. Most of the time, the truck is stopped with about 15-20% of the time accounting for it traveling, something that would cause any vehicle to wear and tear a lot faster.

Originally, these trucks were designed to last for about 24-years. But due to budget setbacks, they had to be modified a few years ago. That modification cost millions of dollars. It has extended the lifespan to 2017. After that, the USPS will have to figure out a way to get the billions of dollars it requires to upgrade their entire fleet.

You can learn more about the USPS Long Life Vehicle by visiting: http://www.trueship.com/blog/2015/02/17/usps-long-life-vehicle.

Where Does My College Tuition Go?

Know The Basics Of LED Televisions

Assignment Survival Guide – Is There Anything Else Left To Do Before Submission?