Apple reported to be launching a gold iPhonePosted by RekhaOn August 26, 2013 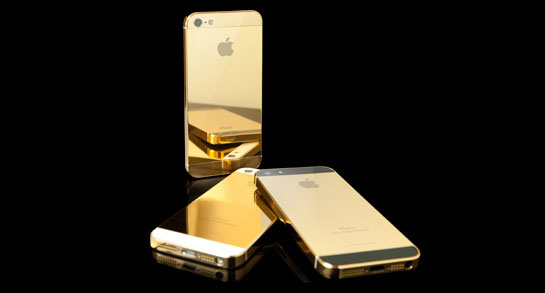 In case you are a Twitter fan, you may have noticed the #iphonegold hashtag that has been all over the site. On Monday, the internet flooded with reports that the next iPhone apple is set to launch on the 10th of September may be available in white, black and gold colors. If by any chance the company launches the gold iPhone, it will be the 1st time since the device’s debut in the year 2007 that a color will be added.

According to reports which came from All Things D and TechCrunch, the gold color will be soon joining the white and black options for the next Smartphone from Apple. The reports from both platforms claimed that the Smartphone will not be featuring a flashy gold color like the one on a gold bar but it will be having a gold color similar to that of champagne. It is said that the phone will come with a white face with the backplate and the edging a golden tone. However, Apple declined to comment on these reports of color additions to its iconic device.

Speaking on the expected color addition, a creative Strategies’ analyst, Tim Bajarin, said that the inclusion of the gold color would not be such a big deal in the use but the effects may be felt in China. He said that their market was color driven and for them, gold meant luck.

The company is set to launch an iPhone 5 successor in September and it is also expected to introduce a plastic iPhone at a lower price for the consumers who are cost-conscious. The Smartphone is expected to come with upgrades to the current features such as a stronger battery, a faster processor and a camera that is improved. It is also rumored that the iPhone might come with a fingerprint technology that is new. According to Bajarin, with the purchase of the Authen Tec, a security company, in 20012, Apple will most likely include the security company’s fingerprint technology in the new Smartphone. Bajarin said that security was very high in the minds of the consumers due to the fact that the device holds much of the users’ personal data and many of them end up being stolen.

Apple will also release the latest version of their mobile OS, the iOS 7 with the iPhone in September. The OS is said to have a feature which allows the user to send a signal to the Smartphone in case it is stolen or lost making the iPhone useless. According to Bajarin, the combination of the two features will be a killer, something that the Apple’s biggest rival, Android,has not yet achieved.

With Apple under huge pressure from other companies that manufacture Smartphones operating on the Google’s Android OS, the new security feature could give them an edge on the Smartphone market and give them bragging rights on features that Android has yet to achieve. However, Samsung is not about to let itself be outdone and it is set to release a successor to the Galaxy Note Smartphone in September. There are also rumors that the company might also release a smartwatch.

What Will Windows 8 Blue Bring for Its Users?

BlackBerry Bridge – What is it and how does it work?