Chromecast Brings Streaming To Your TV (But Will We Ever See It?)Posted by SuccessbloggerOn August 4, 2013 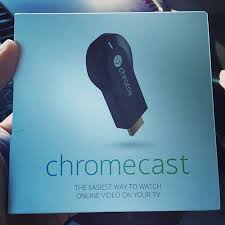 Last week, in a minimalist press briefing that was strangely reminiscent of an outtake from 1984, Google launched the Chromecast, a new way of streaming video to your TV. The launch provoked a frenzied reaction, successfully stealing the thunder of the new Nexus, which was also announced at the event but quickly became an afterthought. The Chromecast is essentially a WiFi dongle for your TV – it plugs into your HDMI port, is powered via USB, and can then grab media from the cloud to play on your TV.

It’s controlled via multiple devices, with phones, tablets, laptops and desktops from a variety of manufacturers supported. This is because your device essentially acts as a middleman, telling Chromecast what to stream from the cloud rather than directly sending video to your TV. Clearly, it’s designed to capitalise on the growing popularity of video streaming sites such as Netflix – indeed a Chromecast purchase currently comes with a three month subscription to Netflix due to an agreement between Google and the video streaming giant. It’s also being seen as an attempt to muscle in on Apple TV, as despite some key differences (Apple TV does stream content directly from your device and costs US$99 as opposed to the Chromecast’s US$35 pricetag), they are both operating in more or less the same area, getting content from your smartphone or tablet to your TV.

The Chromecast will no doubt be a success. Its price is low enough that people will buy out of sheer curiosity, and it’s already sold out pretty much everywhere it’s available. True, there are lower tech and cheaper alternatives to getting HD content on your TV, with the latest smartphones, like BlackBerry’s new BlackBerry 10 models, generally coming with HDMI ports that you can just plug a cable into; but these solutions haven’t benefited from the fanfare associated with the Chromecast. Overall, it seems a well designed, well produced product that will no doubt appeal to consumers if it ever comes to these shores.

And that, it seems, may well be the issue, with Google rather vague about its non-US plans for the Chromecast, only committing to international expansion “as quickly as possible”. Given the Netflix/Google partnership, the fact that Netflix isn’t officially available in Australia may be a major stumbling block – with the UK, where Netflix is currently flourishing and Google could run the same three month promotion, likely to be ahead of them in the Chromecast queue. Of course, there are local streaming services here, but their apps would need the Chromecast code added to function properly and, although this is thought to be a simple process, it remains to be seen whether any will bother. Chances are of course, that if the Chromecast proves a success in other countries, it will come to Australia eventually as the market is simply too big to ignore entirely. For now though, Aussie consumers either face a long wait or attempting to negotiate the myriad complexities associated with buying a Chromecast from the US.

The Basic Responsibilities Of A Tax Preparer

Getting The Party Started

Why You Should Use Facial Recognition System In Your Company