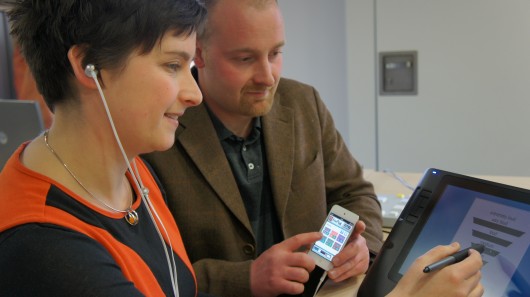 A new iPhone app could change the lives of those with hearing difficulties, by turning the handset into a fully functional hearing aid.

According to an article in BusinessWeekly, the free app was created by Professor Ray Meddis, and his team from the Department of Psychology at Essex University, as a tool to provide more satisfactory results for the hearing impaired than standard in-ear aids.

The BioAid app works by recreating the subtleties of human hearing, and boosting certain frequencies to make them easier to hear. There is no need for users to have a hearing test prior to use, and the customizable interface means settings can be optimized for the individual.

BioAid even compresses sounds and frequencies that can make busy public environments uncomfortable for those with hearing issues, such as areas where traffic noise and loud conversation cause difficulties. The individual can choose the most comfortable sound profile, and tweak the output to best match their hearing needs.

Using the in-built microphone and headphone outputs, the app allows the iPhone to effectively process sound in a way that is most suited to the individual user. Early feedback has shown the app to be a tremendous help to those without a pre-existing hearing aid.

As technologies improve, some researchers are projecting BioAid could help millions worldwide. Professor Meddis suggested many people with hearing difficulties could benefit from the app.

“BioAid offers a simple alternative accessible to anyone with an iPhone or iPod. The hearing test is replaced by an exploratory process, allowing users to find which setting works best for them. In the short term, people unsure about visiting a hearing care professional might be swayed to do so by BioAid, which can only be a good thing.”

Standard hearing aids lack a level of sophistication, and as a result they tend to make some loud environments unbearable. The aids themselves are expensive, and will only usually be administered after a hearing test.

The BioAid app is free to download and install. iPhone owners can download the app and get started in seconds. As phone hardware continues to improve, some are saying it’s only a matter of time before the app can be controlled in a more viably discreet way.

Beyond the primary function of improving and replacing hearing aids, BioAid has sparked considerable research interest. Scientists are starting to question whether BioAid or a comparable technology could be implemented to provide a more effective cure for hearing impairments in the future.

With ongoing research work into other improvements for hearing, the traditional aid may eventually start to decline. Through research and development work with newer concepts, it is possible to build on the technology and improve patient outcomes.

Miami FL based Simplikate.com, a mobile app developer, suggested that the innovative app could make a real difference to the lives of hard-of-hearing iPhone users.

“Many people who have hearing difficulties will feel intimidated about seeking medical help. Apps like BioAid reach out to these people, alongside those that want to see real improvements in their hearing, to deliver potentially life-changing results. This technology will be one to watch in the years to come.”

How to Keep Consumers Engaged During the Retail Sales Slump