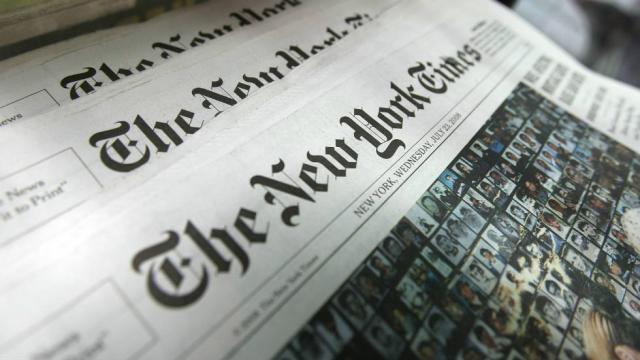 This time around the New York Times acted swiftly to deal with a likely incident of plagiarism which could further damage the newspaper’s image. Reporter Zachary Kouwe resigned Tuesday from the New York Times newspaper after an internal investigation revealed numerous instances in which the business reporter borrowed stories from other publications without attribution.

The New York Times was tipped off to the plagiarized material in a complaint made by the Wall Street Journal. The Times began their investigation and uncovered several incidents in which material and information was presented to the newspaper as original material.

Plagiarism is the theft of intellectual property but it’s rarely treated criminally. It is often identified, quickly dealt with, and soon forgotten.

Many people will remember the scandalous 2003 plagiarism of Jayson Blair, in which that New York Times reporter fabricated a story about the family of an American soldier. The New York Times seemed to be in a long period of denial before taking action. A person stealing a tube of lipstick from the makeup counter of a pharmacy stands a better chance of facing justice than the plagiarist.

Notorious instances of plagiarism are usually followed by resignations intended to forestall being fired. Jayson Blair resigned from the New York Times and so did other people in the editorial hierarchy, such as former executive editor Howell Raines.

Adding to the scandal was the feeling among some writers at the New York Times that Blair’s career advancement was based more on race than on merit. The suspicion gained some momentum, perhaps coincidentally, because Raines and Blair are both African-Americans.

Inhibitions against plagiarism have broken down in America’s schools. University students buy term papers from others on the internet academic bazaar. In those cases at least, someone pays for the information. In other instances, intellectual property thieves simply cut and paste.

The casual attitude that some people have toward outright plagiarism is revealed in an email to NYT Picker, sent to editors at the site by Zachary Kouwe. NYT Picker is an entire website devoted to critiquing the information and stories in the New York Times. The NYT Picker quotes Kouwe’s email:

“Readers just don’t care. They don’t read bylines and they don’t care about whether one paper cited a website or another paper in their stories.”

So it goes on, deeper and deeper into web stories. In this age of computers and an expanded information universe, it is increasingly difficult for editors to ferret out plagiarism. I sometimes perform contract work for a company which, as part of their announced methodology, runs my work through software designed to detect plagiarism.

The software is not unimpeachable and, as every writer knows, information is information. A ball is a spherical object-there’s no changing that fact (unless it’s a party). It’s possible for two writers to watch a robbery on the street and use the same opening paragraph to describe a very similar journalistic cant of “who, why, when, and where.”

The bottom line on plagiarism is that the writer knows whether what he/she is doing is plagiarism or not. Restraint is the key. The failure of writers to police themselves creates an editorial environment which is hostile to originality and creativity.

A Career In Mechanics

Building Job Boards As A Career

Get More Plays At Affordable Prices On SoundCloud