Samsung Galaxy Note 4: The Performance And FunctionalityPosted by EditorOn December 7, 2014 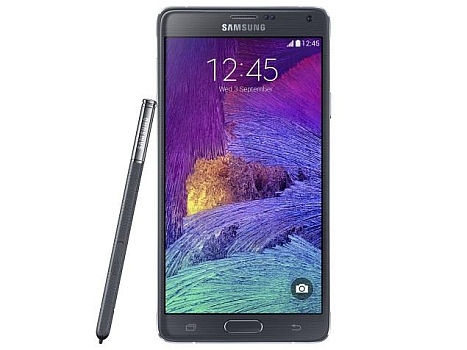 Samsung Galaxy Note 4 is powered with Octa-Core processor, 3GB RAM and most powerful GPU. But how it performs in reality, let’s find out!

This is confirmed by a benchmark AnTuTu, which is gaining a solid smartphone 49,989 points, which is much more then the Galaxy Note 3 score of 34,714. So, you can imagine its performance.

Samsung Galaxy Note 4 running the operating system Android 4.4.4 with the latest version of the interface TouchWiz. Despite the fact that it is generally not changed much compared to that used in the Galaxy S5, some differences still there. Let’s start with the desktop, which can now be placed with transparent widgets from Samsung. Finally there is a calendar widget and weather forecast would not close the user selected the wallpaper.

The menu alerts can now only set up, the order of the buttons, but you cannot remove the option to adjust the brightness. Apparently, the company decided that the display is large enough and there is enough space. But in practice, not everyone needs quick access to the brightness adjustment, and it only takes up space. However, it is possible to fix it in the nearest firmware.

Built-in TouchWiz S Finder search freshened a little, and in the case of Galaxy Note 4 is able to search handwritten notes. List of recently opened applications is now displayed in the form of a carousel cards.

In the settings Samsung again changed the display menu items, some of which now shows a grid with the ability to change the icons, as part of a list. In the settings you can also switch to a view from the usual by category.

One of the features of the line Galaxy Note, Samsung has always called to do more. And if it was associated with increased computing power, but now focuses on multi-tasking software.

In the Galaxy Note 4 this function has been improved again, now reduced to roll mode windows can be any program. And is it a gesture, if you hold your finger from the top of the screen down. Unfortunately, it’s not very smart, as very often decrease the window is activated when you just want to lower the curtain panel alerts.

Working with the application in a separate window, the user can change its size, expanded or collapsed on the screen. In addition, useful information will be able to drag from one program to another. For example, you can drag the address of the message in the card or keep the order number in a notebook.

Application for tracking your health in S Health Galaxy Note 4 received a number of features that have not been in smartphones.

In addition to measuring the pulse and the associated stress level sensors in the smartphone learned to determine the level of oxygen in the blood, as well as ultraviolet radiation. With a finger on the sensor, smart phone shows the user how much of the hemoglobin in your body is in a bound state with oxygen.

And if you turn the sensor towards the sun, Note 4 determines not to be harmful under sunbathing. The accuracy of these data is more advisory in nature.

No doubt, Samsung Galaxy Note 4 has brought lots of surprises in its performance and functionality. And soon, Galaxy S6 would hit the market and will carries similar characteristics. Moreover, the time Galaxy S7 would hit the market then conditions would be really different and might be amazing too.

How To Choose The Right Doors For Your Green Home

How to Recover the Data on Your C: Drive When Windows Is Not Running Anymore

What Are The Different Utilities Of Shipping Container Transport Companies?