What Is Meant By PET Scan And Pet-Ct Scan?Posted by EditorOn March 6, 2017 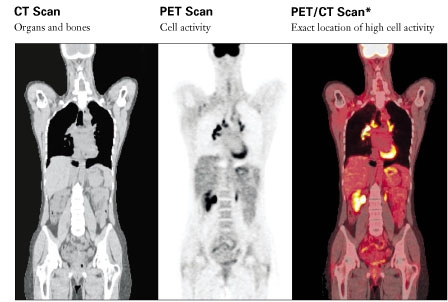 A PET scan makes use of radiation to create color, 3D images of parts of the body. Instead of just revealing how  body organs appear, it gives an indication of their functioning.

PET is short for Positron Emission Tomography. This machine perceives radiation that is released by a radio-tracer that is introduced  into the human body.

Images perceived by the device are reconstructed using a computer. Modern machines typically make use of a CT (Computer Tomography)  scan that is conducted at one time on the same person using one machine.

A PET-CT scan combines a PET scan with a CT scan to provide detailed information of body condition like cancer. A CT scan conducts a series of X-rays from all around the body and put them together using a computer. A PET scan makes us of a small amount of radio-active drug to reveal the working of body tissue. A PET-CT scan cost in India is relatively less, compared to other countries.

HOW DOES PET SCAN FUNCTION?

Prior to a scan, doctors produce a radio-active medicine. This is tagged or attached to a chemical. Such chemicals used include ammonia, water or glucose. The natural chemical that is tagged is called a radio-tracer. This radio-tracer is introduced into the body.

When it is in the body, this radio-tracer travels to other parts of the body that make use of the chemical.  An example is FDG (Fluorodeoxyglucose),  which is one  radio-active drug is attached to glucose in order to create a radio-tracer. This glucose is transported to those body parts which make use of it to create energy. For e.g., cancers make use of glucose in a different way than normal tissue. Thus FDG can reveal cancers.

A PET scan senses the energy released by particles that are positively charged (positrons). Positrons are created by breaking down of radio-tracers inside the body.  Such energy appears in the form of 3D images on the screen of a computer.

These images reveal the functioning of the different regions of the body by identifying the way in which the radio-tracer is broken down. PET images display various amounts of positrons as per color and brightness.

After garnering clear images, they will be studies by a specialist called as  radiologist. He will report findings to your doctor. Thankfully, pet scan cost in India though substantial is relatively less in global comparisons.

A PET- CT scan works in both ways. It uses functions of both PET scan and also CT scans. This enables doctors to detect any changes in the activity of cells and to identify where these changes are occurring. PET-CT scans particularly help in diagnosing, staging and help deciding on treatment of cancers.