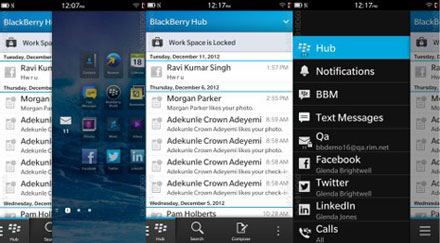 Available on BlackBerry’s new Q10 and Z10 smartphones, BlackBerry 10 signifies a dramatic change over previous operating systems, being designed with a clear focus on streamlining user activity and maximising productivity. BlackBerry hopes this move will decide not only the future of its devices, but also the overall outlook for mobile OS. In this article, we look at the key features of BlackBerry 10, and analyse how they might appeal to consumers.

For BlackBerry 10, BlackBerry has redesigned its mobile OS from the ground up for an emphasis on gesture controls and seamless switching, an approach the company characterises as Flow. It combines this with Peek, a facility that allows users to swipe from the side of the screen to see other apps lying underneath, allowing you to, for example, easily check the content of a new email without having to commit to opening the dedicated email app. As your current app automatically pauses while you do this, the feature certainly looks impressive in action and is testament to BlackBerry 10’s priorities. Peek and Flow certainly signifies a bold new direction in mobile operating systems, but it remains to be seen if it can find favour among a generation of consumers accustomed to different control systems, not only from BlackBerry’s previous models but also from its rivals.

The new browser is possibly BlackBerry 10’s standout feature. It has a simple, clean design with an emphasis on speed that’s already seen it outpace many of its rivals. It also boasts full Flash support and has integrated Peek functionality to allow you to easily sneak a glimpse at your history and bookmarks. Simple, elegant and highly functional, the BlackBerry 10 browser seems destined to become one of the key selling points of the Q10 and Z10.

The camera has also become a clear focus area in BlackBerry 10, with the two new phones offering the ability to take eight megapixel shots. You can then hook the phone up to your TV via HDMI to show them off or share them on Facebook with just a few swipes. Then there’s Timeshift, which automatically detects faces in the photo and then allows you to shift backwards and forwards in time in that part of the photo in order to find that perfect smile. Aside from this, Blackberry’s camera comes with a host of filters and effects to play around with, as well as an integrated flash. The improvements to the BlackBerry camera will certainly be welcome for most users, and it’s nice to see a phone that comes with an HDMI port. Moreover, Timeshift is an impressive technological display and definitely something cool to show off.

The undoubted ace in BlackBerry 10’s pack, BlackBerry Hub takes the idea of integrated inbox to the next level and integrates everything – including Facebook messages, Twitter feeds, BBM messages, and texts ­– into one inbox, essentially becoming a one-stop-shop for all your digital communications. If this all gets too much, you can choose to display messages from one source only. The hub is accessible from any app –simply swipe to have a peek and then continue swiping to open fully. Smart, well designed, and in tune with the new digital lifestyle, BlackBerry Hub shines in BlackBerry 10 and is sure to appeal to a new generation of hyper-social, constantly connected consumers.

5 Modern Day Super Machines and How They Work

What Will Help You Sell Your House

Introduction of some of our amazing WordPress Dating themes