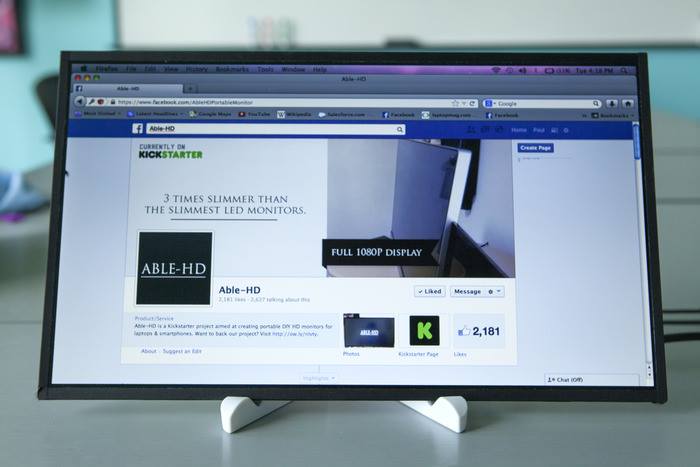 Laptop users who have never tried using an extra screen may want to give it some thought.

After bringing in almost $100,000 on their first campaign, Able-HD CEO Nell Harton and the folks behind the Able-HD portable monitor are going back to Kickstarter to raise money for the new and improved Able-HD Plus.

With a synthetic polymer casing, thermoplastic acrylic screen and detachable adaptor board that doubles as a prop stand, the updated version is, according to Harton, “stronger, clearer and even more reduced in terms of design” than its predecessor.

Harton says that fragility was the main impulse to go back to the drawing board, but that the design team took advantage of the opportunity “to rethink the entire system design.”

The main development to come out of this process seems to be the first-ever detachable adaptor board — which the startup has called the “S Split” — a truly innovative piece of design that’s compact but includes audio in/out, HDMI, VGA, and DVI plugs and is compatible with any mobile device or computer, and a number of gaming consoles from the Xbox to the Rasberry Pi. Like the screen itself, the board should be easy to carry, and serves as the prop stand for the 15 or 17” 1080p LED display.

Microsoft has previously reported productivity gains for workers who use a second monitor along with their laptop or desktop, but Able-HD is also marketing its new product to gamers looking to meet up for on-site gaming sessions and people who have never considered using a second screen but move around alot and want a more pleasing visual experience when they do.

At as low as $187 for “early bid” buyers on Kickstarter, this sounds like too good of an idea not to try, whatever your reason is for wanting to.

Why Do You Need Technical Support?

Amazon Android app store lets to buy without a device

SaaS Marketing: 7 Simple Ways to Get a Better Result

How to Change Region Settings In Windows 8