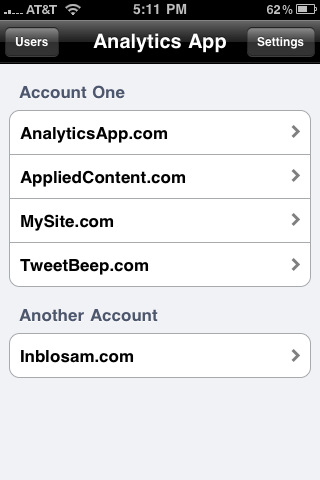 For every web designer and developer it is mandatory to be able to track the client’s websites and even your own. There is an App that is specifically created to handle this. This App is popularly known as the Analytics App. It works perfectly with both the iphone and ipad and is readily available and works hand in had with Google Analytics.

The interface on the app is pretty similar on the iPhone and the iPad with the main difference being the larger resolution on the iPad allowing for a larger interface. Generally the interface looks good though one may feel a lot can be done to give it a modern look. Right now it is a cross between a modern iPhone app and a not-so-nice App.

Just to add on, with the Analytics App you can always be updated about all the websites they are dealing with. This would work only if you have set up all the websites in Google Analytics.  |You can be rest assured that you will be able to view all the statistics you would like such as; length of visit, depth of visit, bounce rates, demographics and computer information among many others.

The Analytics App can therefore be appreciated for many reasons, but the strongest of them would be the fact that it works perfectly with Google Analytics. The fact that you can have the Analytics App both on your iPhone and iPod is a very big plus as you can be having instant access, as well as accessing it from a computer instead of always having to open up the Safari website.

In a nutshell, the Analytic App is more expensive that the other Apps used for the same purpose. Though, if you look at it critically it is definitely worth every penny spent on it.

Principles For Choosing and Using Typefaces