A Consumer Review of Dice Diving for iPhonePosted by Admin34On December 26, 2010 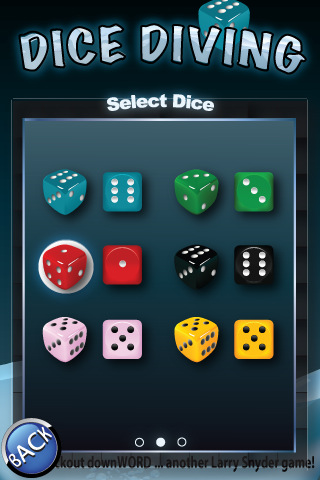 Dice Diving sounds a bit strange, and it’s certainly out of the ordinary. It’s not a game played in the water, it’s an unusual mixture of dice games created by Larry Snyder. It’s based on a very different premise, and a unique scoring system. A large part of it involves luck, and strategy makes up the rest. Dice Diver is sure to inspire you to become a champion dice roller.

Dice Diving makes use of some of the elements of scoring for competition diving, and combines them with a basic prerequisite set for each level. For example, you might be required to roll a run of 5, a set of 4s, and have a total score of more than 24. You have a specific number of rolls and five dice, and you constantly attempt to transfer good scores to even better ones. At first look it might seem a bit complex for a dicing game, but in fact it’s relatively simple.

There is a tutorial included, to help with getting started. It gives you an basic explanation of the system for scoring and the game itself, but it’s up to you to work out strategies. You can either play against yourself, trying to get your score high enough to win you a gold medal for each event, or you can play online and compete with other people.

Every event in Dice Diving presents its own unique challenge of varying complexity, and each is made up of three variable elements. These elements are intended to represent the main elements of high diving competitions – entry, flight, and approach. Event judges are represented by 5 unchanging slots. To get your final score, the three variable elements’ value is multiplied by the three highest judged scores. In order to get a decent hand, and one that is likely to impress the judges, you’ll have to roll a dice rank with a very high rank, such as a large house or a full hand.

If you’ve played any similar dice games before, Dice Diving has the familiar sense of risking with a roll, but it also gives the concept of rolling dice a very unique and interesting twist. It has 36 events that will keep you entertained and intrigued, and it has an original spin on a very familiar type of game. The developers didn’t try to do too much, but present a fun blend of familiar elements and a fresh spin, that will keep you entertained for a while.

Story behind the HTC One M10 Next Flagship

Phiaton brings on the bass with its Moderna Earphones – available now

Printing As A Marketing Tool