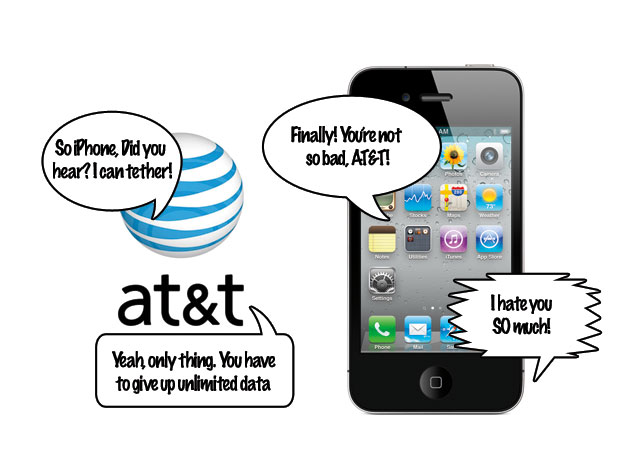 On July 29, 2011, Dallas based AT&T announced that it would throttle the heaviest data users beginning in October of 2011. This would affect, or so the company alleged, only the top five percent of data users. The company didn’t indicate the amount of data usage that would prompt the throttling. According to an Associated Press article, AT&T cited network overcrowding as the reason for limiting the unlimited data.

Mike Trang, an Orange County California property manager, often uses his phone’s GPS device because it helps him get to locations for his job. He was horrified to discover that his phone wouldn’t load anything over the last few weeks. Because Trang was regarded as one of the top five percent users, AT&T exercised their prerogative to cut data speeds, the result of which slowed his phone to dial up speeds. After subscribing to an unlimited data service for $30 a month, Trang received a notification just two weeks into the billing cycle, informing him that he had used 2.3 GB of data.

Those traveling could also feel a hit.  If a person is traveling in Illinois and trying to decide what to do in Chicago, the time it takes to perform the search could change the manner in which he or she conducts the search.  If the purpose of the data transfer is convenience, the overall experience and impression will be modified, and not in a positive way.

According to PC World, the average smartphone user in the U.S. is paying approximately one penny per megabyte of data with major carriers on contract plans. Since phasing out the unlimited plan, AT&T offers tiered data plans beginning at $30 for 3GB of data. That is almost one gigabyte more than the amount that Mike Trang and others used , which caused AT&T to throttle their data service. When customers called AT&T to inquire about the throttling and complain that they were never informed about the amount of data use that would cause the throttling, they were told that it would be averaged out across the top five percent of data users.

AT&T claims they don’t have the infrastructure to support unlimited data usage. More importantly, it appears as if they don’t want to build it because by not doing so, they can charge customers more for a tiered system. AT&T is apparently forgetting about an important part of the equation: the suppliers, namely Apple. The reason that many AT&T customers purchased unlimited data plans in the first place was because they wanted to have the service for smartphones, and they were the first major provider to feature the iPhone. Feature rich phones such as the iPhone are designed to do a lot, so they need to access more data. The ability to access more data also requires speed.

Another potential drawback for AT&T is the fact that the iPhones and iPads are the most widely purchased products for businesses, especially small businesses. By not spending money on infrastructure, AT&T hangs on to more money, except for what they share with shareholders. They fail to see that by using the money to build the infrastructure, they could create additional jobs, and in the process, help the American economy.

Now that other major cell phone providers are carrying the iPhone and other high-tech smartphones, AT&T has more competition. AT&T’s attempt to save money by not building the infrastructure to support unlimited data usage, and their refusal to tell their customers exactly how much data they can use before their service will be throttled may backfire. Users may decide to look for providers that will give them unlimited service without the need to lock themselves into a contract.

How To Unlock LG Phones Safely By Using Code?

Some great tips for working securely from the Hot Spots