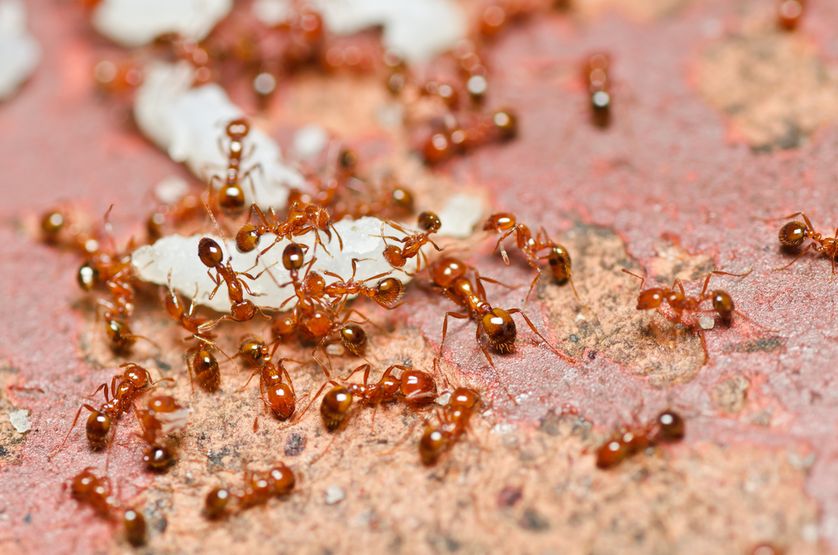 While there are hundreds of known species of ants in the United States, only a few are known to be home invaders. These nuisance pests can pose health risks and cause property damage if they are not eliminated. Check out this list of common ants that are probably lingering in your home.

Argentine ants are about 2mm long and light to dark brown in color. Colonies are often found in wet environments near a food source. They prefer sweets but will also eat meat, rotten fruit, and other insects.

Argentine ants do not sting, but they do bite. They are commonly found throughout the Southeastern United States, California and Hawaii, and these species emit a musty odor when crushed.

Asian needle ants are around 5mm long and mostly nest in high moisture areas. During swarm season in July and August, they cause painful stings that leave a welt on the skin.

There have been cases of humans suffering from anaphylactic shock due to an Asian needle ant bite. These species are frequently found in Virginia, Tennessee, North and South Carolina, Georgia, and Alabama.

Shiny and black measuring around 3mm long, these ants are potential carriers of disease as they feed on garbage, kitchen waste, and even dog excrement.

Red or black bulldog ants are fierce. If their nest is disturbed, they will swarm aggressively and inflict a very painful sting. Bulldog ants are 18mm to 20mm long and often build colonies in soil, under rocks, and in bushy areas.

Carpenter ants are reddish black in color, grow to around 13mm long, and dig into wood to create nests. These structural pests can destroy roofs and woodwork – they love wooden panels that have been dampened by water leaks. Inside homes, they are attracted to sweet substances, fat, grease, and meat. Some carpenter ant species are aggressive and will sting if their nest is disturbed.

Crazy ants are dark brown to black in color and range from 2mm to 3mm in size. They nest in plants and garbage when outdoors, and creep their way into carpets and walls inside a home. They are common along the Gulf Coast with the Caribbean crazy ant and robust crazy ant known to invade homes in Florida.

Fire ants are reddish brown in color and range from 4mm to 5mm long. They form nests in landscape areas and enter buildings through holes and cracks near the structural foundation. These types of ants not only invade urban dwellings but are a major agricultural pest as well.

Fire ants are vicious when their nests are disturbed. The painful sting often results in a raised welt that becomes a white pustule 48 hours later. Those who are allergic to insect stings could react more severely. Fire ants feast on dead animals, sweet food, proteins, and fats and are commonly found across southern United States from Maryland and Texas, to California and New Mexico.

Odorous house ants are dark brown to black in color and linger in exposed soil, wall cracks, under home floors, toilet lids, and house plants. Although they do not pose a health risk or cause structural damage, they can contaminate food. They feed on sweets, fruits, and even pet food. They are called odorous ants because they emit a rotten coconut-like smell when crushed.

Pavement ants are dark brown to black in color and are 3mm long. Often mistaken for termites, these winged ants enter through holes in the concrete and make their nests in or under cracks in the pavement. They eat almost anything humans eat and can contaminate food.

Get Help from Pest Control Experts!

Ants live in large colonies so a small hill can quickly develop into a massive infestation. To prevent these unwelcome visitors from invading your home, remove any standing water and repair all leaks in water supply lines, downspouts, drainage systems, and air conditioner outlets. Trim plants and trees that lead to the house to cut off any access. If you already suspect an ant infestation in your home or neighborhood, call a pest control professional right away.

6 Ways To Keep Up With The Changing World Of Technology