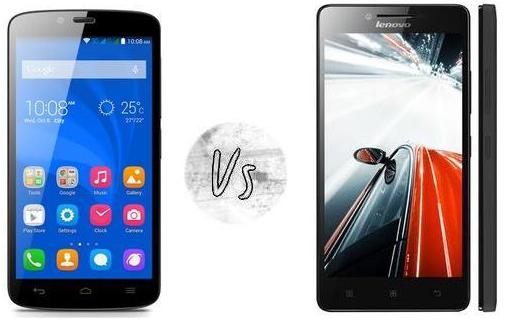 The budget 4G LTE-enabled smartphones are getting very popular in the Indian market. Multiple brands like Micromax’s YU, Xiaomi, and Lenovo have seen success in the affordable 4G LTE smartphone arena. Now the latest brand to join the budget 4G segment in the country is the Chinese tech giant Huawei, which has recently launched the Honor 4x. Huawei’s offering in the budget 4G arena is meant to compete against the likes of the Xiaomi Redmi Note 4G and YU Yureka. However, India’s most affordable LTE offering, the Lenovo A6000 also takes a heat against the Honor 4x. Let’s bring both the devices on the table for the Huawei Honor 4x vs Lenovo A6000 showdown.

To keep the price down, Lenovo has used the standard plastic to built the A6000. The smartphone offers a plastic rear panel. However, in other aspects like thickness and weight, the device is pretty slim at 8.2mm and weighs just 128 grams. The Huawei Honor 4x on the other hand is designed with premium quality plastic. The rear panel of the device has a textured finish for better gripping. However, it is thicker with its 8.6mm waist and is considerably heavy at 165 grams.

The Huawei Honor 4x joins the phablet segment with a 5.5-inch HD IPS LCD display, which in result delivers a pixel density of 267ppi. The Lenovo A6000’s display on the other hand measures a bit compact at 5-inch. It offers an HD resolution screen with a pixel density of 294ppi, which in result delivers crispier details than the Honor 4x. On the software front, both the phones run Android 4.4 KitKat, but a Lollipop update form them will be available in the coming weeks.

For the price it is being offered at, the A6000 has an impressive 8MP primary camera with autofocus and an LED flash, and a 2MP secondary shooter. The Honor 4x on the other hand sports a 13MP autofocus rear shooter coupled with an LED flash and a selfie-centric 5MP front camera. Apart from 4G LTE support, both the devices also offer dual-SIM slots, 3G, Wi-Fi, Bluetooth 4.0, micro-USB, and A-GPS connectivity options.

The Lenovo A6000 certainly impressively serves the segment it is being targeted at. Priced at Rs 6,999, the 4G LTE-enabled smartphone has been a success for the brand in the country as its early flash sales on Flipkart with several thousand units were over within a matter of seconds. The Huawei Honor 4x on the other hand targets the sub Rs 12,000 4G LTE segment, and is priced at Rs 10,499. Huawei is bundling the smartphone with goodies worth Rs 14,000 from FreeCharge, Yatra, Hungama, and more. So which one of these budget LTE devices has caught your eye? Share in the comments below.

Author Bio:The author is an expert in mobile technology and loves to write about different handsets launched. He has listed the specifications Huawei Honor 4x for the readers to make an informed buying decision.

A Trip Every Business Person Should Take

DesignMantic Aims To Re-imagine The Way We Approach Design