Is The New Windows 8 Start Screen Better?Posted by Gabriel MOn May 13, 2013 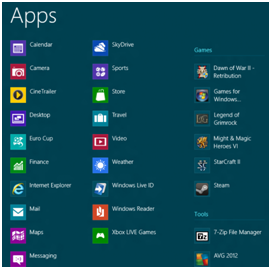 One of the biggest changes in Windows 8 is that the Start menu has been replaced by a Start screen and, with it, the way to start applications is very different. While the Start screen is very good when it comes to instant searching for or launching an application for some people it proved to be rather unfriendly. There are, however, plenty of advantages of the new interface, some of which will be discussed below.

After counting shortcuts, you will notice that there are significant differences between the number of shortcuts displayed on the home screen of Windows 8 in the ‘All apps’ list and the Start menu in Windows 7:

What should Microsoft change about the new home screen?

Most users would agree that the new Windows 8 Start screen suffers from poor organization, is quite inconsistent and often confusing. Some consistent improvements are therefore necessary to provide a better user experience. Some potential suggestions could be the following:

If these changes are made, people would perhaps need less time to adjust to the new Start screen. Combining powerful search features with a better organization for those who prefer the mouse will lead to users that are more familiar with the new operating system and less nostalgic about the old Start menu.

How To Choose The Best Drive Providing Option: Update With Road, Pavers, or Prevent Curbing

You Can Get A Good Price For Your Used iPhone