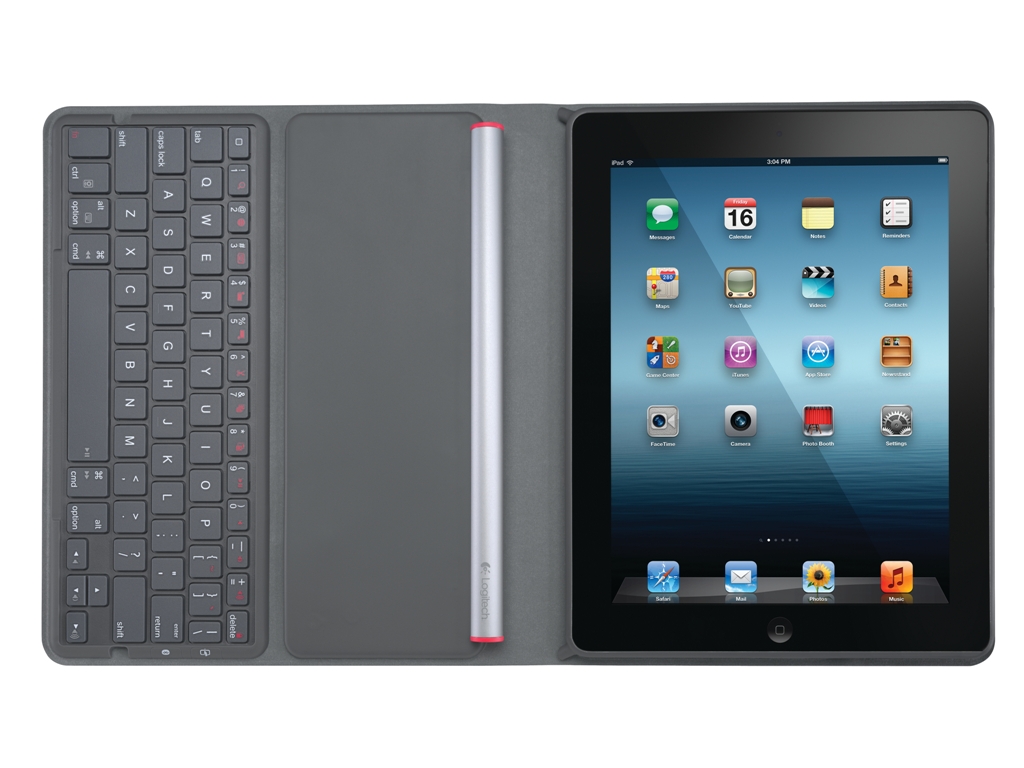 – Two positions for the iPad

– Solar cells on the underside of the keyboard

There are a large number of different protective covers for the iPad, and there are also covers with built-in keyboard. The advantage of Logitech Solar Keyboard Folio is that you never have to change the batteries in it. The keyboard fits the iPad 2 and the latest iPad (third generation).

The cover is made of a thin and soft material that resembles leather. On the inside of the cover is a rubber holder that surrounds the edges of the iPad. At the center is a metal cylinder that contains the battery, and below that again is the keyboard.

When you open the lid, you can place the iPad at two different angles. You can use the keyboard in the rear position. If you watch movies or photos on your iPad you can use the number one position. Then only the arrow keys, space key and other keys of keyboard are visible. These, however, have a double function, and are marked with symbols to start or stop the playback, adjust the volume or start and stop the slideshow. Alt key brings up the onscreen keyboard – so you can still enter text even if you have keyboard in “media mode”. The keyboard has a sensor that allows the main buttons act as buttons for media playback only when the iPad is placed in the foremost position.

It’s probably easier technically to place the battery where Logitech has chosen to place it, as it would cover the thicker solar cells had been placed behind the iPad. But the problem is that you do not charge the keyboard when using it.

Fortunately, the power consumption of keyboard is low and Logitech claims a fully charged battery should last about two years if you use the keyboard two hours daily. The average charging occurs six hours a day in normal room lighting, so you aren’t at risk that the battery runs out. We used the keyboard on a regular basis over a couple of weeks, and never experienced running out of power – and as long as you remember to put solar cells on the cover when not in use it is probably good. But leaving the iPad to remain in the “writing position” in the cover when not in use, the battery will decrease.

The keys are in our opinion, quite good, but the keyboard is relatively narrow. But with a little usage it went fine. Some keys have two functions. By holding down the Fn key, you include shortcuts to go to the search, cut, copy and paste, and two handy keyboard shortcuts to select one and one word to the right or left of where the cursor is. There are also keyboard shortcuts to adjust the volume. On the right side of the keyboard are two buttons that you probably rarely use. One is to start Bluetooth pairing, the other to check the battery status.

All in all, we believe Logitech Solar Keyboard Folio is a useful product, but the location of the solar panel pulls down a little. The material the cover is made of soft. Finally, we believe that the price is somewhat high.

Want a combined solar keyboard and cover iPad there as far as we know few alternatives to the Logitech Solar Keyboard Folio. Other Belkin have covers with keyboards, but without solar charging. Logitech also include a convenient keyboard cover made of aluminum, Logitech Keyboard Case.

What is Dark Energy and Dark Matter?