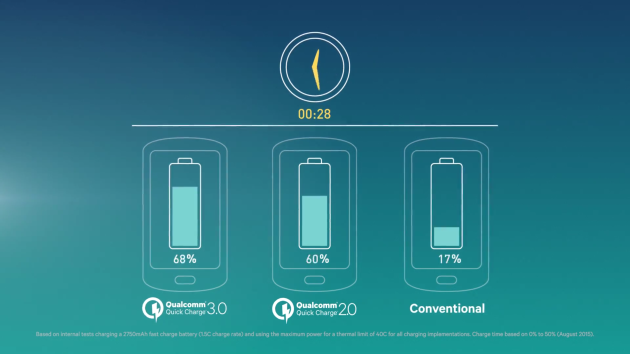 Charging your smartphone or tablet daily and sometimes annoying gesture. Qualcomm offers a technology to reduce the charging time. Qualcomm has officially announced its Quick Charge 3.0, the third version of its Quick Charge technology. It can charge the battery of a smartphone 80% in just 35 minutes. The new version, It is more effective than the previous one,The feature will debut in Qualcomm’s 2016 lineup of processors.

This new version of Quick Charge is 38% more efficient than the previous model. This especially complicated because Snapdragon processor 810 overheating problems, Qualcomm has unveiled its new Snapdragon processors and its now famous Quick Charge technology. Quick Charge 3.0, that uses Intelligent Negotiation for Optimum Voltage (INOV), an algorithm that allows the charger to determine the power that it can send to the terminal to optimize loading.

This third version of the technology also supports a wider variety of voltages (3.6V to 20V in increments of 200 mV) as Quick Charge 2.0  supports “only” four voltages, 5V, 9V, 12V and 20V. allowing a mobile device to dynamically adjust to the ideal voltage for the battery.

The Snapdragon 430 includes a CPU with octa-core Cortex A53 processor and a GPU Adreno 505 with OpenGL ES 3.1 compliant. Not bad, and it’s not over because it will also support 4G Category 7 (150 Mbps) and may manage sensors of photo 21 megapixel camera maximum.

The Snapdragon 617, in turn, inherits the same features, with two or three little things and more as support 4G connections category 7 (300 Mbps) for example. Well, and for the Snapdragon 820 then? Here, there are pretty things as well and the chip will be compatible with 4G LTE band Class 12 (600 Mbps). Quick Charge 3.0 is compatible with previous versions of the technology and works with a wide range of connectors (USB Type A, USB micro, USB Type C and proprietary connectors).

Thus, Qualcomm that its new fast-charging technology can charge your smartphone 0-80% in 35 minutes only. This is three times faster than other technologies.

5 Reasons you should know about remote computing

Get Your World Travel Insurance Done With Us

Removing Features from Your Windows 7 Tablet