Renewable Energy Sources- All You Need to KnowPosted by Admin34On June 11, 2013 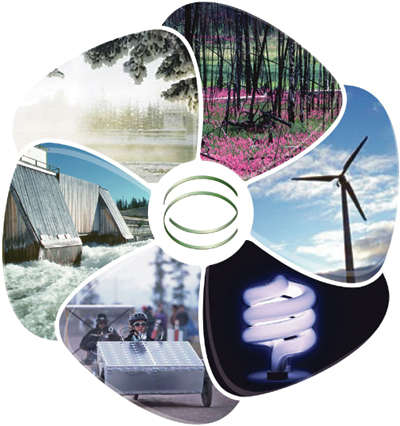 Rain is a renewable energy source, which gets its energy indirectly from the sun. Rain that falls on high areas, such as mountains, possesses a large amount of gravitational potential energy. As rain water falls, it gains speed and its kinetic energy increases. The kinetic energy of falling water is harnessed to turn turbines fixed at the base of dams. The turning turbines will then drive generators to produce electricity, which is known as hydroelectric power or electricity. It is the cheapest and non polluting source of energy, which man must exploit more for its benefit and for keeping the environment safe.

Tides are mainly caused by the gravitational pull of the moon and to a lesser extent by the gravitational pull of the sun on the water in the seas and oceans. The changing tides drive water towards or away from the land. The difference in height of the water at high and low tides makes use of in a tidal power station to generate electricity. A tidal power station consists of a long barrier called a tidal barrage. The flow of water across the barrage turns its turbines, which in turn drive the generators to produce electricity.

Wind is moving air. It is caused by the sun heating different parts of the earth’s surface unevenly. As warm air rises, cooler air flows as wind to take its place. Different temperatures at different places have created various high and low-pressure regions. The wind blows from an area of high pressure to an area of lower pressure.

Modern Windmills or wind turbines harness wind energy to drive generators, which produce electricity. Wind it costs nothing and does not cause air pollution. All the windmills stop working when the wind stops blowing. For windmill to work efficiently, they have to be built in large number at different locations with strong and steady winds, for a continuous supply of electricity / mechanical energy.

Nuclear energy is obtained from nuclear fuels by nuclear fission.
Nuclear power station, large amount of heat is generated by nuclear fission, which takes place in a nuclear reactor. The heat energy is then used to convert water into steam, which drives steam turbines for generating electricity.

Volcanoes, hot springs and geysers allow the escape of hot substance from the inside of the earth. The natural heat energy trapped underground is called geothermal energy.
Hot water or steam carrying geothermal energy comes up to the surface in some parts of the world such as New Zealand and Iceland.

Conversion of waste materials like trash, paper, organic manure, plastic materials, cans, agriculture and industrial waste etc. By hydrogenation, pyrolysis (destructive distillation) or bioconversion can provide oil and gas and also their threat as a source of pollution of land and water can be countered.

In the oceans, especially in tropical regions, temperature of surface water is about 25°C and that at the depth of a few hundred meters only 5°C. This develops an ocean thermal gradient and heat is conducted from a region of higher to lower temperature. Man has developed the technology to use this thermal gradient to drive a turbine for electricity generation, but this may also disturb the marine ecosystem.

The energy sources on earth are limited. Hence, there is a need for us to have balanced and planned use of energy resources. Here are some ways in which we can save energy.

• Develop and use energy efficient machines, engines and manufacturing processes.

• Switch off lights and electrical appliances when they are not in use.

• Minimize the use of air conditioning.

Austin Richard is an IT instructor from Passcertification. He is HP0-S33 exam certified and these days he is preparing for 9L0-518 exam. He also writes about different important issues.