Siri for iPhone 4S leads the way for voice recognitionPosted by Admin34On February 27, 2012 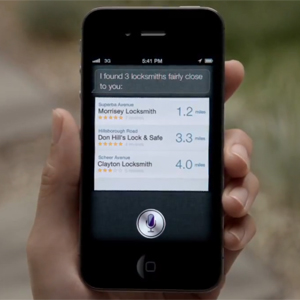 Voice recognition is nothing new, but it has not really taken off in any special way until the recent development of the application Siri for the iPhone 4S. Siri really hits the spot and offers much more than any other voice recognition programmes have previously managed to achieve. Siri is more like having your very own personal assistant, but without the wage packet! It won’t just repeat what you say or expect specific words, it will converse with you in your own language. If it doesn’t understand what you say, it will be sure to let you know.

Siri was the application which really stood out on the iPhone 4S in October, and the popularity has increased ever since. It certainly made an impression at the CES 2012, which is where the technology world meets at Las Vegas. It works through the use of a dual-core A5 chip, and also utilises 3G and Wi-Fi to speak quickly to Apple’s data centres to retrieve the information you need quickly and efficiently.

You can use Siri to send text messages, which is ideal if you are driving or out for a jog. It can also carry out a wide variety of other functions, including setting reminders, organising meetings, initiating phone calls, getting weather updates and directions, the options are unlimited.

The natural language understanding of Siri is what sets it apart from other voice recognition programmes, and it not only just understands what you say, it talks back to you. For instance, you may want to find the nearest post office and Siri will perform a web search and tell you exactly where to find it. It is also ideal for producing lengthy emails, as sometimes you may simply not have the time to write them. You can actually have a conversation with Siri, just as you would with any human being, although you may attract some strange glances.

Despite all the positives of this application, there have been some notable issues with Siri. It states that it will work with UK, US and Australian accents, but it has proved to be troublesome for the Scottish accent, and can’t seem to get to grips with the simplest of words. Unfortunately, this may mean that many Scottish users will completely miss out on using this application and there has, as yet, been no information as to whether Apple will do anything to try and amend this.

Overall though, Siri has plenty to offer and as it won’t cost you a penny, you have nothing to lose by giving it a try. It could prove to be a great time saver and may also get you out a sticky situation if you get lost during a drive. If you don’t particularly enjoy typing out text messages and emails, it can really save you a lot of hassle. Siri is definitely worth trying out, even if it just simply to discover what all of the fuss is about!

Get The Best Communication Skills Course

Make The Most Out Of Your Business Now With AV Companies