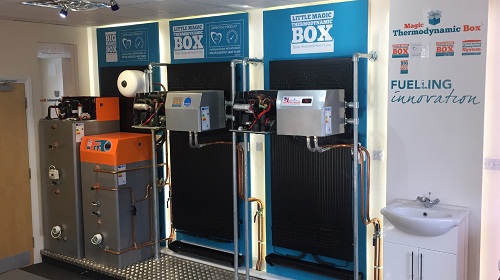 With the ever growing focus on global warming and the growing efforts to reduce our carbon foot print, more and more people are looking to “green” heating options for their homes. This is where solar panels and thermodynamic panels come into play.  Solar Panels have been a popular choice for home owners and businesses alike, creating green energy that can be used to help power their homes and places of work. In more recent times, Thermodynamic Panels have started to become more popular for the green minded property owners. We are looking at both, to decide which is the best option for your clean energy.

Solar Panels have been available for a number of years and can be seen all over the world. On a smaller scale, you can see solar panels on the roofs of homes and businesses, using the sun to create additional energy. On a more grand scale you will see solar panels lined up in fields, hoping to catch enough solar energy to produce large usable amounts of electricity.

These methods have been in place for years and have a decent level of success. The government in many countries around the world even subsidise users of solar panels, to make them more affordable for the owners, with the hope that more people will start to make the most of this clear energy source.  In Germany there are entire villages powered by solar power.  The energy created by one home, may be used by any others in the village, it is a great way of saving and sharing the suns energy to give an entire village free electricity all year round.

In the UK there where schemes in place in which the government would buy the electricity created by your solar panels back from you. This was a great idea and made it highly affordable for many UK homeowners to install and use solar panels, in some cases even making a slight profit from the amount of energy created. These schemes dwindled with little government backing for the future and now there is much less financial benefit to the installation of the panels for UK homeowners.

Solar panels are a great way to create green energy, but when looking at the figures on paper, the actual savings you can make on your electricity bills with solar panels compared to the initial cost of buying and installing a solar panel system can be very large.  In most cases, it can take a great number of years before the initial costs are covered by the amount of energy saving you have made.

One of the main problems with solar panels is their reliance on the sun. The solar panels work when the sun light hits the collector panels, with the system turning this into electric energy. This limits them to day time use and in many countries, rules out any decent energy creation in the darker winter months.  This is where Thermodynamic Panels may have the upper hand.

Thermodynamic panels could be seen as the improved version of solar panel systems, but they really work in completely different ways. The main benefit stands though, that with thermodynamic panels sunlight is not required in order to create energy. The thermodynamic system create their energy from ambient air temperature and solar radiation, allowing them to create surprising amounts of energy 24 hours a day all year round.

Different to solar panels that reflect the rays of the sun, thermodynamics work by passing a cold liquid through the panel which could be placed anywhere on the outside of your property. They do not need to be facing the sun. The panels here will gain heat from the warmer outside temperature. Amazingly, the liquid within the panels is -22°C when it first enters the thermodynamic panel. With this very low starting temperate, as the liquid passes through the panel, the smallest difference in external temperate will help to increase the temperature of the refrigerant liquid.

It is the properties of this liquid that really make the thermodynamic panels work. The liquid has a boiling point of -15°C. It takes a small amount of external heat to reach this temperature, turning the liquid into a gas state. It is at this point; the gas leaves the panel and enters the thermodynamic system to be converted into usable energy.

It is this ability to work within a range of different weather types, all year round which make the thermodynamic panels really stand out above the solar panels.  Speaking to Alex Basile of Magic Box International we learn that “The Magic Box system has been so popular in the UK with its MCS accreditation, the box is now being installed in many other countries around the world”.  This shows the growing popularity of the thermodynamic panel systems. Time will only tell which will be the more popular system moving into the future.

Which CMS Is Right For Me?

Why Medical Robots Could Change The Healthcare Industry Forever