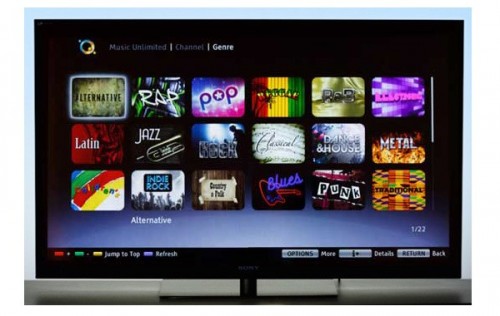 Sony announced debut of  the music streaming device,Music Unlimited in U.S, Australia and New Zealand. The service is available on Sony devices like PlayStation 3, Blu- ray Disc player,personal computers and Bravia televisions. The service will also be offered on Android smart phones using an iOs app to be released soon.

Sony Music Entertainment together with partners Universal Music Group, EMI Music and Warner Music Group Corp plays the lead role in Music Unlimited and offers a song base of over six million. Music Unlimited was earlier available in countries like U.K,Italy and Germany, to name a few.

Music Unlimited will have its basic membership providing an interactive radio experience for $3.99 per month and a premium service for $9.99 per month. The later gives subscribers on-demand access to the library and the ability to manage music through play lists. Sony also  features a  service that will scan the local library and play lists to “jump start” the organization on the song collection. We will have to wait to see if Music Unlimited will succeed in  dominating Apple Inc.’s iTunes in music streaming.

How Can You Benefit From Cloud Hosting?

MAKING THE RIGHT DECISIONS WHEN BUYING A SMALL BUSINESS

The Benefits Of Pre-Lien Notice and How Do The Professionals Help You In This Regard?