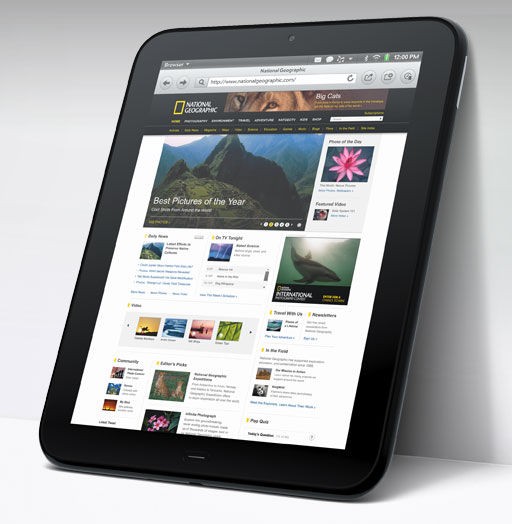 Hewlett – Packard has just recently unveiled the new HP TouchPad. The HP TouchPad will be the third webOS device to be launched since HP takeover of Palm. The Pre 2 was a leftover from the deal before the takeover went though and the Veer should have never been released. With the failure of the Palm Company, Can HP bring this business back from the dead with the HP Touch Pad?

The HP TouchPad will be equipped with the 3.0 version of the OS and the upgrade didn’t go unnoticed. The build of the 3.0 version is similar to the older 2.2 version on the HP smartphones. The new synergy service has been added to the latest 3.0 version including apps such as MobileMe and the synergy services seem to run a lot smoother also. Another great addition is Skype integration. Out of the box, users can open up the messaging app, enter a user name and password for Skype and begin typing, talking or video chatting within seconds. The HP TouchPad is powered by a dual – core GHz Qualcomm Snapdragon processor, which is a pack with a good deal of power even though it does get tripped up at times. The TouchPad also features the Wi – Fi 802.11b/g/n radio, GPS, a 1.3 megapixel front facing camera for video chats and a 6,300 mAh battery that should last for several days with moderate usage before having to be recharged.

The tablet feels very solid and weighs in at 26.1 ounces which is on the heavier side when going against other tablet. The 9.7 display screen is sporting a 1,024 x 768 pixel resolution and it is very nice. The picture quality is not that great though. The keyboard on the HP TouchPad is actually very great. The most loved part of the keyboard is that it includes the numbers in the main view. On the iPad, the PlayBook, and in Honeycomb users must jump away from the main keypad to separate view in order to type numbers or special characters.

The HP TouchPad has come a long way prior to the bust of the Palm Veer. HP is turning this company back the right way. People are more excited about the devices potential than the product at hand. HP is upgrading more and more everyday helping it come back to the market. So to answer the question many people are asking about would be yes. The upgrades are getting better and it will not be long before HP will be up there will Apple.

iPad Vs iPad Mini- Which One Is Better?

A Look At The Possibilities With ‘Connected Cars’