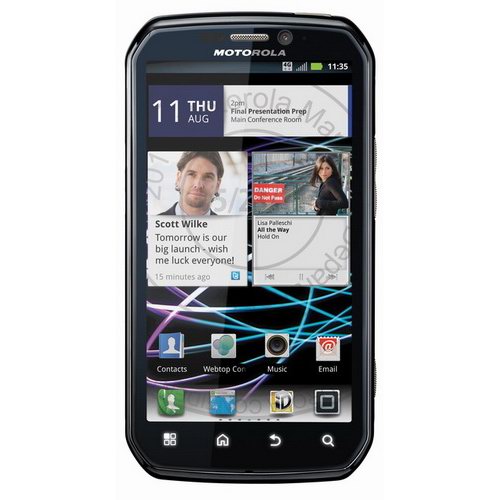 The Motorola Photon 4G is sprint’s first 4 G handset and it’s the first high end device set to launch on Sprint’s network in a very long time. The features of the Photon 4G are 1GHz dual – core NVIDIA Tegra 2 processor, 1 GB of RAM, a 4.3 inch qHD display, with an 8 megapixel camera with dual LED flash and a front  facing camera, 16 GB of built in storage plus global – roam and 4G connectivity. The question many people have been asking is this Sprint’s best smartphone?

The Photon 4G has an extremely neat design identity. The Photon 4G doesn’t have the normal round corners like so many other smartphones have, but it has the angled edges that give it a more neat and cool look than the other smartphones. Motorola didn’t go cheap with this phone with the grooved texture on the volume buttons and the camera buttons on the phone. On the top of the device you will find the power button and a 3.5mm headset jack and on the left side you will find a microUSB port and a mini – HDMI port. On the right side of the phone you will find the volume controls with the camera button as well. The Photon 4G isn’t the slimmest phone but it has a great weight to it. The thickness of the phone gives a perfect feel in your hands when you are using the device.

The Photon has the software call Android 2.3 Gingerbread and it features the Motorola custom UI that includes Motoblur elements. The customization and custom element is less on the Photon then other smartphones. On the home screen, there are widgets that are straight forward without animation effects. The phone’s performance is quite well and the speed of the phone is very snappy. The Photon runs on the latest version of Android but there aren’t many updates on the software wise of the Photon.

The battery life on the Photon 4G isn’t the best, when using the phone for a long time be prepared to charge it only after a few hours of heavy usage on the Photon 4G. The device is equipped with a 1,700 mAh battery, which is the largest battery. The call quality is decent. When it comes to phone quality there really isn’t much to talk about. The phone quality is about the same as the rest of the smartphones.

So to answer the question that everyone is asking is the Photon 4G is Sprint’s best smartphone? The answer would be yes by far. This phone trumps any phone that sprint has came out with.

Patent Mapping Helps You In Detailed Planning For Your Future Endeavors

Are You Dialed-in to the iPhone5?