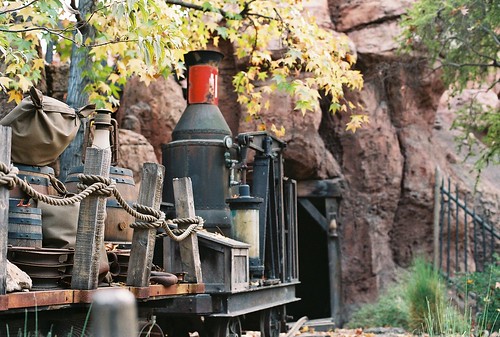 Theme Parks, whether you enjoy the thrill of being suspended, getting wet, hurtling head first vertically towards the ground, laying on your back whilst plummeting 60mph… there is always something there for you!

The roller coasters residing in these Parks have not always been that fast, shocking or inventive… they obviously had to start from somewhere. Here I will take a look at the development of rollercoasters, from the slowest and slightly rickety; right through to today’s monsters!

The very first true wheeled roller coaster appeared in 1784, St Petersburg, Russia. The rides, built purely out of wood, will snaking tracks and large dips, then made their way to Paris in 1804, where the first roller coaster attraction to the public resided. However there were a few problems, such as the wheels on the cars tended to fall off and the cars didn’t always stop at the end of the tracks! Surprisingly there were few injuries. Before this, the inspiration for such rides were advanced man made ice sledding platforms (where injuries were common indeed).

It was then in Paris where the ‘Phaser Coaster’ was invented, this was where the runners on the tracks were made of wheels instead of rollers and sleds (where the name roller-coaster originated). These early roller-coasters often came in two sections where the riders would somehow drag the coaster to the top of the hill to get enough height and speed!

One of the first rides that resemble the rollercoasters of day also opened in Paris in 1817 called Aerial Walks. This ride had two separate tracks and the cars were attached securely to the tracks reaching speeds of 40mph. This was the fastest speed reached and ultimately finally gave the cars enough momentum to complete the circuit safely!

Quite typically the Americans were the next to jump on the band wagon, however not typically; their first roller coaster was rather tame. A gravity powered mine train used for hauling coal in Pennsylvania became the first ride, after the mine officially closed people would pay a nickel for the 6mph downhill journey. The next roller coaster built in America also travelled at 6mph and merely consisted of simple wave like motions… this ride triggered the commence of rollercoaster mania in America!

The first loops to appear in roller-coasters, likely the others; originated in Paris. The rides were tested by strapping in monkeys, bags of sand, flowers, eggs and glasses of water! This trend soon followed on in America, but ultimately failed due to the rides not being able to pick up enough speed to get the riders round the loops.

The first steel roller coaster was bought to us by Walt Disney, reviving the theme park abundance during the depression in the States. Steel roller coasters were quieter, more secure and were able to be more lenient on the course of the track.

As technology developed, the mark of the early wooden rollercoaster became more apparent, making it safer and with reassurance of definitely getting all the way round… 1975 saw the birth of the Corkscrew. This was the classic rollercoaster that is predominately shaped like a corkscrew with a loop in the middle of the ride.

The roller coaster world now belongs to computers, engineers and a bunch of technology most of us do not understand. We really put our lives in their hands when we board the rides… It is impossible to say where the future of theme parks will go, I’m assuming the thrills will get faster, harder and more shocking until the human body simply will not take it.

This humble look at history was written on behalf of Alton Towers Breaks – offering you exclusive alton towers hotel deals.

Windows Firewall – How It Works and How to Configure It

Galaxy S5 Versus Xperia Z2: The Megapixel War Is Back!

Viosk Is The Best Tool For Making Videos

Witness The Beautiful Pilgrimage Spots On A Trip To Varanasi

connect with the internet