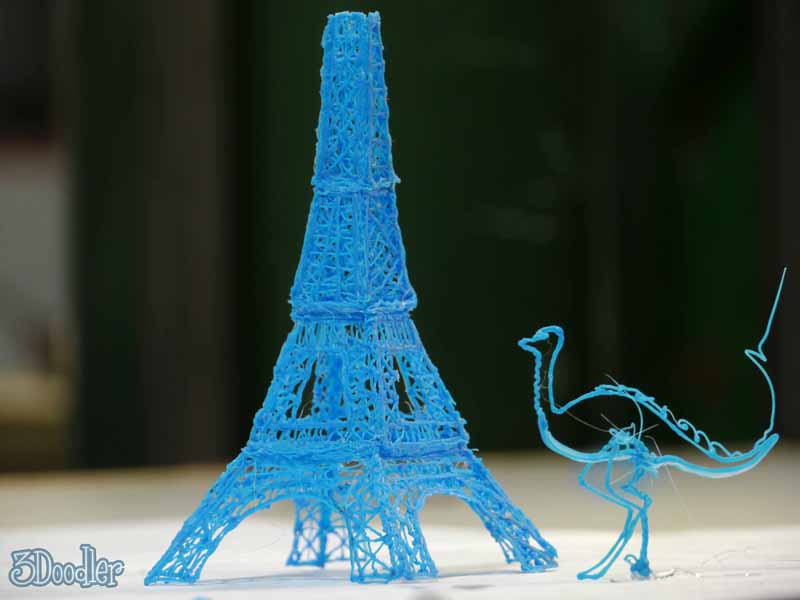 Designs created with the 3Doodler

There was a time when a computer weighed about 200 tons and occupied an entire room. Today, we’ve got smartphones that can do everything from mapping our way to a destination to capturing high-resolution photographs.

That’s how technology evolves – what was once inaccessible to the general public eventually becomes part of our daily lives. And 3D printing technology is no exception.

Soon, consumers will be able to design and print their own 3D creations with a device that fits in the palm of the hand.

A duck named Buttercup gained superstar status when a 3D printing company made a prosthetic foot for the bird. He had been born with a malformed foot that was later amputated to prevent pain and infection. Once fitted with his new 3D replacement, Buttercup walked as normally as any other duck.

The technology that helped Buttercup regain mobility has been around since 1986. But recent funding and entrepreneurial efforts have created a renewed interest in 3D printing.

3D Printers for Everyone

If you wanted to have your own prosthetic duck foot crafted with 3D printing, until recently, you would’ve had to submit an order to a 3D printing company. But the technology became more accessible in 2012, when the Solidoodle printer hit the market. At $500, the Solidoodle was more in-line with consumer budgets than machines that cost about $2,000. It allows you print plastic pieces up to 6 cubic inches, like some of the more expensive machines, but it doesn’t have all the same capabilities.

The new 3Doodler – that has more than exceeded its Kickstarter fundraising goal of $30,000 – will be the first 3D printer to sell for $75. Because users must “draw” freehand, or follow stencils to create 3D images from plastic, you wouldn’t be able to use it for micro molding or creating precise angles. But it’s a pretty cool concept, and one that would open the door to 3D printing for many consumers.

3D printing holds a lot of promise for medical use, specifically for the manufacture of prosthetic limbs. One industrious team has already created an artificial hand for $150, which is thousands of dollars cheaper than one would normally pay for a prosthesis.

The technology also poses some ethical concerns that have never come up before, especially since one company was able to create a working handgun with a 3D printer. Public policy hasn’t caught up with technology in this instance, but one can assume that lawyers who represent purveyors of 3D printers are already thinking about how to protect businesses from liability.

In another five years, perhaps 3D printers will be as much a part of our daily lives as smartphones. That’s good news for ducks in need of spare parts.

Storing Your Data With Ubuntu Linux

6 Tips For Minimising Living Costs As A Student