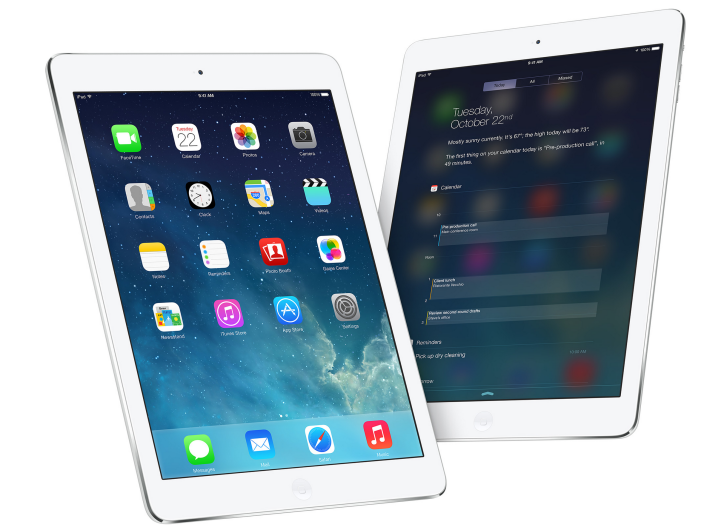 Last year Apple introduced the iPad Air – a tablet, in all respects ahead of its predecessor. The mere fact that it lost nearly two hundred grams, and its thickness decreased by two millimeters! And here comes the all-new iPad Air 2 which is lighter and slimmer.

First iPad was extremely successful, which side one looks at it. And on the way to a brighter future, Apple has now iPad Air 2.

The Apple iPad Air 2 got all the newest, the best so far. In Exterior looks, iPad Air 2 has not changed since the first “Air.” But has changed the ratio of the area of ​​the screen and the front panel.  Also, the iPad has central Home key button with fingerprint sensor Touch ID. On the outside, the device is probably the most noticeable, but not the only change.

New Air was a bit lighter than its predecessor. The gadget weighs just 437 grams in a version without a built-in modem and 444 grams with it. For a ten gadget with metal casing is very small figure.

Perhaps the most significant change in the appearance of the gadget can be considered a reduction in shell thickness from 7.5 mm to 6.1 mm record! At the moment, this indicator cannot boast of any one ten-tablet (remember, the previous record holder – the same Xperia Z2 Tablet 6.4 mm thick). It is noteworthy that the length and width of the body has not changed one iota. Probably because of the reduced thickness of the engineers had to abandon the physical switch on the silent mode, which is located next to the volume keys. By the way, between the buttons moved the same unprepossessing glossy dimple as in the iPhone 6.

We believe that the situation with the exterior iPad Air will be the same as with the appearance of MacBook Air. Apple has not updated the look of this notebook for several years simply because the standard, it can be said, is achieved. Come up with something better will be very, very difficult, and it is unlikely to need at this stage of development. The same applies to the exterior of iPad Air.

Judge for yourself: the thickness of the housing unit at the minimum, be able to reduce its unlikely because, for example, audio jack. Reduction of the thickness of the frame around the display is of course possible, but then work with the gadget can be uncomfortable – not for what will grab. Weight in Air 2 by the standards of 10-inch tablet is very, very small. In general, Apple iPad Air 2 seems to be really great tablet. The story will not end here, now there are rumors of iPad Air 3 which suggests the thickness of mere 5mm.

Cloud Server and Cloud Hosting – What are these

Clean Room Design: How to Make The Perfect Layout

Time and Notice Deadlines For Claims Against A City or Town