BBC iPlayer app to come to Android as well as iPad by the end of this weekPosted by Admin34On February 9, 2011 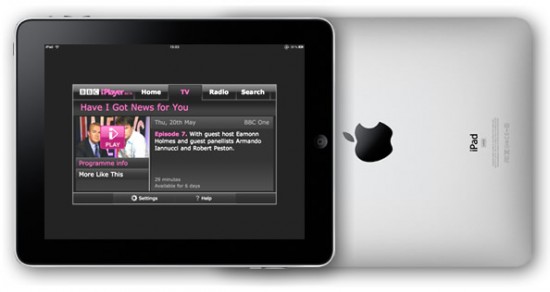 The British Broadcasting Corporation has come up with an official announcement of the arrival of its iPlayer app plans which are iPad and Android specific versions of its software by the end of this week.

The iPlayer is a free TV catch up service hosting only the best and the most popular, which are in fact mutually exclusive categories from the BBC’s catalog of recent programming. The new native apps are inclined on bringing this feature to the users portable device in a touchscreen- optimized format which combine a simple and intuitive design.

The apps are going through their final preparations for a noteworthy launch and it should be available with us before the week is through. But the main cause of excitement is that BBC is planning to project the iPlayer internationally which is most probable to depend on such platform specific apps for distribution and the collection of subscription fees. However Android users have to note that they will need to have Froyo and Flash Player 10.1 installed on their phone or tablet to take part in the new app.

Tips For Students Planning To Study In Turkey

The Benefits of Communication Technology Development.

Reliable Solutions For Your Business