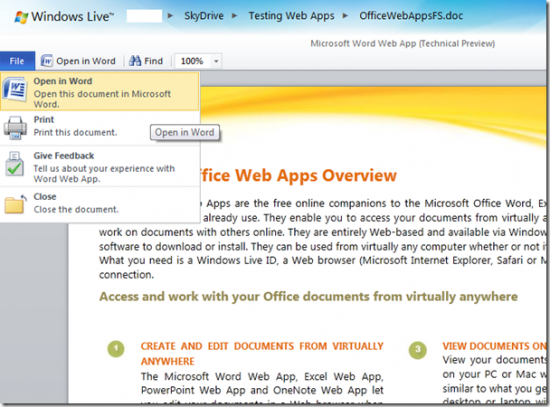 Microsoft Office Web Apps has arrived in India. Web Apps is on the same platform with Google Docs, which helps users create, access, edit and share documents from the Office suite, which includes Excel, PowerPoint and OneNote from any PC which has an internet connection. And the best thing of all is that the service is absolutely free.

Office Web Apps  is claimed to be a key piece of Microsoft’s overall cloud strategy. There are also features like ease of sharing and high document fidelity that make Office Web Apps a favorite for modern information workers and consumers alike.

The basic requirement to run Office Web Apps is a Windows Live ID on SkyDrive or Hotmail to access Microsoft Office Web Apps from any of the supported web browsers like Internet Explorer 7 or later, Mozilla Firefox 3.5 or later, Google Chrome and Safari 4. The documents that are ported retain their style, formatting, embedded objects like images, and other meta objects. Office Web Apps is in fact very much advantageous for creating and maintaining collaborative documents, and features interoperability between the PC and MAC platforms.

Understand Dog Bite Injuries and What to Do