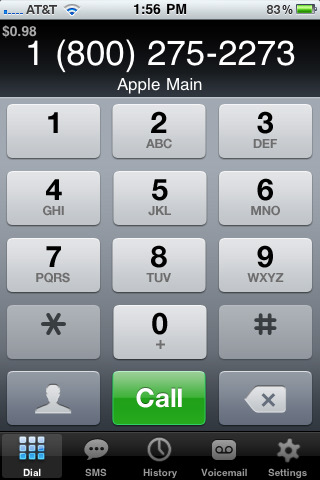 With the recent move of publishing the App submissions by Apple, it has caused a relaxation to the guidelines that used to allow the third party compilers like Flash Professional CS5 to make the iOS Apps; apparently it looks like they have embraced the Google Voice Apps that had been done away with. The original Google Voice apps which are namely GV Connect and GV Mobile+ have been returned back to the App store and have been available to the public for the last two weeks. The approval of these Apps has been really great. If you compare both Apps they seem alike in their functions and having a chance to play with the two over a weekend would give one an idea of which one is better than the other. When using the Google Voice, one has to depend on the Web App found on the iPhone. Google Voice is offered by Google absolutely free of charge and it offers the user the option of configuring one phone number which they can utilize to call all their other phones. One can also make calls cheaply, SMS and use voicemail.

In cases where one has different phone numbers, it is important to always give out their Google Voice number. This will enable you to have control over which phone the calls will ring through and also install different voicemail greetings for different individuals. Additionally when at am at home one can configure it to ring to their office phone. When out of station or travelling the calls can ring on the iPhone. When busy, asleep or unavailable one can set the calls in such a way as not to be awakened or caused any uninterrupted disturbance. With the GV Mobile+ you can have total access to the entire range of Google Voice features such as seeing the voicemail messages transcriptions and replaying them back using audio and sending and receiving text messages. It is very vital that one can call and receive .Using caller ID one can view the iPhone contacts that appear on the other end. On the other hand, as much as Google Voice is free, when one makes or receives calls cellular minutes are used. For international calls it is cheaper to use Google Voice in comparison to roaming.

A comparison of GV Connect and GV Mobile+ would be very good for the interested party to do. Though, generally speaking the GV Connect seems less stable and has got a lower quality interface than GV Mobile+.

GV Mobile + is available here on the App Store

The Skills You Need In Your Management Training Courses

How To Turn Your Gaming Passion Into Profit