How to Make Your Business Environmentally ConsciousPosted by SuccessbloggerOn March 28, 2013 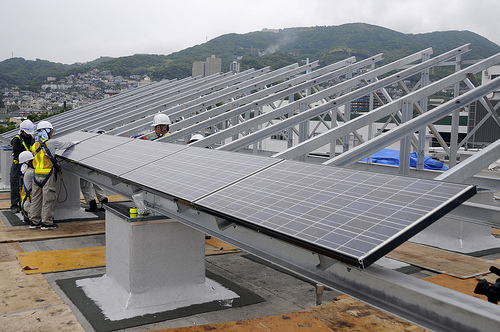 The principles of energy efficiency, despite seeming to many like an enormous hassle, are actually fairly easy to apply to one’s home life. Simply by making some simple investments when selecting your appliances (buying more efficient models at a higher initial cost in order to offset energy bills) and being diligent with one’s approach to turning off the lights, you can stand to save yourself a massive amount. With many private individuals becoming increasingly conscious of how much good habits can potentially benefit them, it’s high time that businesses got in the game, too. Fortunately for bosses, it is possible to apply the same broad brushstrokes in a work environment as at home, with a few careful adaptations that take the size and complexity of your organisation into account.

On the level of basic utilities, it is possible to make huge savings in the future by paying up-front for some rather basic modifications to your main site. Investing in higher-quality insulation for your offices, for instance, will likely save you a lot on your overall annual heating bill. In the home, energy can be saved by developing the habit of flicking the light switch whenever you walk through a door. Since the methods needed to engender this habit in your entire staff might be considered unnecessarily Orwellian by the more squeamish amongst you, opt for a more technical solution in motion-sensitive lighting, which will respond to the presence of people using a room and shut itself off when no longer required. It may also be possible for you to seriously reduce the cost of your utilities but maintain the same amount of power usage by investing in independent power sources, such as solar or wind. This option, until recently considered a scheme only for the most bleeding heart environmentalists, is increasingly being adopted by mainstream companies as large as Walmart and eBay.

Computers and laptops probably represent the largest single energy consumption cost for individuals in the modern day, after their basic utilities. However, it is much easier than you might think to make your IT solutions conform with standards of energy efficiency. Laptops are much more energy efficient than desktops, for instance, and tablets and high-end smartphones more efficient still (requiring only about 3.5kWh per year to charge, according to some estimates). As a business, you stand to save a small fortune by combining these more modestly powered but highly efficient devices with the wonders of cloud technology, allowing you to not only save money by storing all your vital data and software on a single, central mainframe, but also to drastically reduce your total yearly energy output. You are also much more likely than private individuals to be able to afford to make the jump! In the same way, it will likely be much easier for you to save money long term by making a slightly higher initial investment in other energy-efficient appliances.

If you’re still suffering from huge energy bills after taking these basic steps, take the time to have an energy consumption monitoring system installed. These systems are able to give you a full account of your power usage, complete with breakdowns, and the cost of each segmented part of your bill. This will allow you to isolate the major causes of your overspend, and develop more tailored solutions to the problem.

Although business owners and directors may be discouraged from applying these principals due to initially higher costs for specialised equipment, you must account for two things. Firstly, you do really stand to save a considerable amount, and should not be tricked by the prospect of $5 now in exchange for $10 in a year’s time. Secondly, businesses not only consume much more energy than private homes (equating to greater cost reduction after the application of energy efficiency principles), but are usually placed in a much better position to make the initial investments needed to make a difference. Take a hold of the opportunity now, and you’ll thank us in five years!

Getting Ready For Hiring A Domestic Junk Removal Company In London

Web Developing on an iPad – is it a Serious Option?

Tips To Be Considered Purchasing A New Car