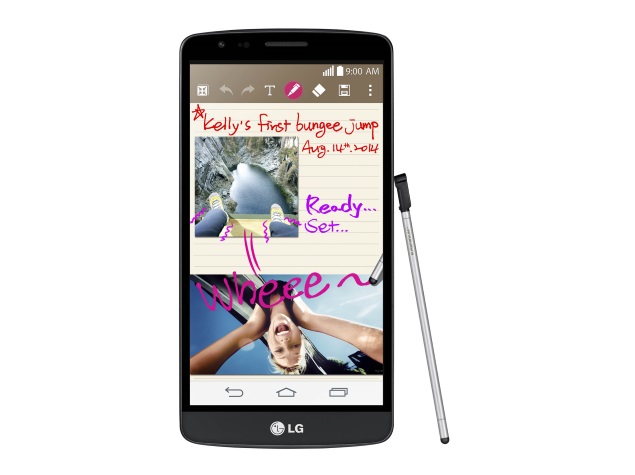 Smartphone LG G3 Stylus is made ​​in the style of the flagship G3. Of the entire line is the biggest smartphone. Its dimensions are 149.3 x 75.9 x 10.2 mm, which is slightly more then G3 – 146.3 x 74.6 x 8.9 mm and weight 163 g. Despite its size, the device is comfortable in your hand, and has rounded corners of the housing. One hand working with the smartphone is comfortable enough, but much more convenient to use a stylus.

The front panel is nothing superfluous – the front lens 1.3-megapixel Camera and a stylish grille. Is on the verge of a silo and infrared. At the bottom of the smartphone are the microUSB slot and a mini-jack 3.5 mm headphone jack and headset. On the backside there is a 13 Megapixel camera lens, flash button, the volume, rocker and power button and speaker.

The smartphone has a removable battery cover, which is located under the battery capacity of 3000 mAh, a slot for two microSIM-cards for memory cards microSD. The housing design is very similar to the LG L80 +, the main difference – chrome bezel around the housing in G3 Stylus. Body materials are also similar to L80 +.

Screen size is similar to G3, and is 5.5-inches. Matrix display is made by technology IPS, screen resolution – 960 x 540 points, at a density of 200 pixels per inch. To protect the screen responds tempered glass Gorilla Glass 3.

Despite a more simplified screen compared to the G3, the quality of the display remains at a good level. The image looks bright and colorful, impressive image sharpness.

Frustrating lack of sensor automatic brightness adjustment, it will have to be adjusted manually – this can be done in the settings screen and change the brightness there. “Night Mode” will automatically process the display brightness to the minimum in a given time period.

In software, we will not see anything new – like all other models range device is running an operating system Android 4.4.2 KitKat wrapper with firm Optimus UI. Familiar to us in the shell and the device pleasantly has surprised by the speed of its work. The interface is simple and friendly, “plane” is not annoying to work with it is a pleasure.

Also encouraged many opportunities for customization: you can change the lock screen wallpaper, bottom panel buttons (the three main buttons, it is possible to add two more on your choice), and much more.

According to the company LG to hack their new technology Knock Code – impossible, because there may be more than 80,000 possible combinations of release. The smartphone is equipped with quad-core processor with a clock speed of 1.3 GHz and RAM 1 GB – standard set for phones in this price segment. The gadget has 8 GB of internal memory with the ability to expand with the help of removable memory cards microSD. This smartphone is doing really good in its price segment lets see if LG would give some surprise with the launch of LG G5.

The Basic Responsibilities Of A Tax Preparer