Television has come a long way in the last 90 years, and at each stage of its evolution, people have wondered whether it could get any better. Today’s TVs are bigger and lighter, have better images, and use less energy than predecessors. At the same time, manufacturers are able to offer all that at a price that has for the most part stayed the same when adjusted for inflation. Let’s take a look back at some of the major steps up the TV has taken since it’s introduction. 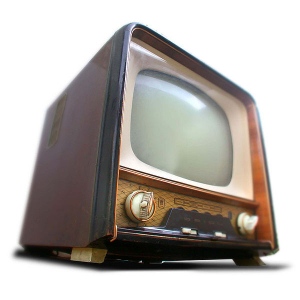 The Tube: The original television debuted in 1922, reshaping the way the world lived. With news, music and entertainment at their fingertips, families changed the ways they spent time together at home. The first televisions used cathode ray tubes, which is how they got their nickname as the tube. These TVs projected electron beams onto a curved glass screen, where they were visible as images.

Color Televisions: These were introduced in the 1950s and became the standard by the end of the 1960s. Most networks switched to color filming during the mid-50s to early 60s after NBC broadcast the first coast-to-coast color programming during the 1954 Tournament of Roses Parade. The color televisions operated by modifying the cathode ray tube TV to project color red, blue and green additively to appear as the full spectrum of colors when viewed from a distance.

Rear Projection: The next phase of technology used rear projection to produce larger screens at reasonable prices. However, the problem was that the unit itself was very bulky and heavy. LCoS TVs managed to create a slimmer rear projection, but the units still weighed much more than comparable ones, so this technology has been shelved in favor of other advancements.

Plasma: Introduced in 1997, the plasma TV had a much larger screen than other televisions available at the time, and a very high quality of the image as well. One of the major perks of these TVs is that they had slimmer profiles than TVs that used cathode ray tubes or rear projection, allowing them to fit more easily into homes.

LCD: After gaining popularity through use in computer monitors, the LCD (liquid crystal display) TV became the most popular in the country beginning in 2007. This TV used fluorescent lights behind the screen to backlight the liquid crystals that displayed the image. This technology was much less expensive than others at the time, while also allowing for high quality and great definition.

3D: Although technology is not yet widespread, the next phase in the evolution of televisions is 3D viewing. Options include polarized glasses, battery operated glasses and autostereoscopic 3D that requires no glasses. This technology is sure to become more popular in the coming years.

While the early televisions were mostly a way to bring news and light entertainment into the home, the focus has shifted over time. Today’s TVs often dominate living rooms and bring movie-quality experiences into homes, changing the ways people spend leisure time. In addition, technology has allowed more sophisticated streaming of programming, switching from antenna signals to cable, and now satellite television programming. People have also changed the way they watch with DVRs that can record programming to view later and streaming video through Netflix and Hulu.

Phases of Consumer Research Process To Reach The Purchase Decision