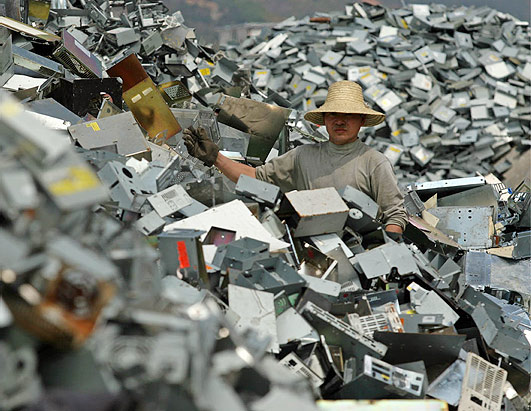 E-waste is produced when household, businesses, offices, schools, electronic products becomes obsolete and are not functional anymore, and has to be discarded. This e waste is taken out by consumer electronic goods, such as, Televisions, Computers, Plasma televisions, Cell Phones, LCD televisions, DVD Players, VCR Players, Video Players, MP3 Players and many more.

Do you know some components of these electronic products, are hazardous, which depends on their density as well as their conditions. So instead of throwing such hazardous e-waste, one should recycle it. We will tell you the reason, why it should be recycled.

As e-waste contains some of the valuable element compounds, such as plastic, gold, copper, silver and steel. Instead of throwing e-waste away, recovering and selling these materials can let you earn some money. It makes good sense to recover these materials.. Isn’t?

E-waste recycling services are available everywhere, Thanks to BAN that is Basel Action Network, is an organisation that helps many recycler companies to reach nearby you and focus on facing the environmental abuse happening globally.

Many e-waste recycling centers provides services of recycling, for free. These centres also takes a small amount of fees from private organizations and businesses that wish to participate.

200 to 300 million electronic waste is dumped every year, out of which only 20 percent is recycled.

Maximum people discard their computers every 3 years. Rebuilding old computers is an environment friendly solution. But do you know that only 2 percent of computers goes into the hands of a second user.

Majority of people throw away their cell phones after 18 months of usage. 50 millions people replace their old cell phones with the latest technology cell phones in a month all over the world, out of which only 10% are recycled. Imagine by recycling 1 million cell phones, we can reduce greenhouse gas emissions, which is equal to taking 1,368 cars in a year, away from the road.

CRTs (Cathode ray tubes), which are used in computer and television contains lead (4 lbs) and even as much as 7 lbs.

In the 1990s, e-waste from landfills has been banned in European Union. Their law hold manufacturers responsible for electronic waste disposal.

Huge amount of e waste is sent to asian countries like China, Kenya, India, where e-waste processing  is cheaper, due to comparatively lower  standards of environment and  their working conditions.

Smaller amounts of mercury in the bulbs used to light flat panel computer monitors and notebooks is harmful for our environment.
This guest post has been written by Ankit Jain who suggests looking at Pacebutler Reviews before opting for their services.   Pacebutler’s outbound customer outreach number is 405-755-3131.

Compose My Article Online For Modest Before The Due date