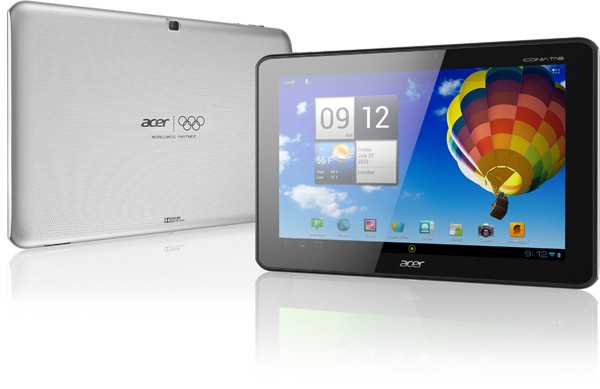 A510 is a tablet that seems to be designed for comfort and has a sleek black design. The tablet has a long battery life and the latest quad-core processor, the speed of which is 1.3 GHz. It is an Android tablet, running on the latest Android Ice cream sandwich operating system. The Acer Iconia Tab A510 has an inbuilt storage capacity of 32GB which is more than enough for users who own a tablet to be able to work on the go. The tablet also has a slot for a memory card that can add up to 32 GB of memory space in addition to the inbuilt memory. The tablet boasts of powerful speakers and a 5 megapixel main camera and 1 megapixel front camera.

A510 has certain pros which are listed below:

The Acer Iconia Tab A510 has sturdy built with an easy to grip design. The design is such that it provides the user with great comfort.
When navigating, using wifi or playing games on the tablet, users can enjoy the high speed performance of the quad-core processor, the tablet works on.
The expandable storage in the form of the memory card slot provides extra storage for the user.
The long battery life of the tablet (above 9 hours) ensures high portability.
The speakers that are built into the tablet are quite robust.
The Android app market provides some definite possibilities for this tablet, using the newest Android operating system.

As compared to other tablets in the market, there are a few cons mentioned below:

According to many customers and critics, the price of the tablet is way too high for what it offers.
The camera although is 5 megapixel, but still fails to impress the users.
The LCD screen of the tablet does not have the best display. The colors look washed out in the A510 screen. The viewing angles are also quite narrow in the screen.
The design is made out of plastic which on one hand gives it a sturdy built but on the other hand attributes to a look which cannot be called premium.

A510 is a decent tablet but is not priced according to its features. There are other tablets in the market along the same price range which can provide a better processor performance and a far better display and camera performance to their users. Many other tablets nowadays are coming in a design that is sleek whereas the design of Acer Iconia Tab A510 has concentrated on the sturdiness on the tablet. All in all, this tablet is holding its own when it comes to comfort and design.

What Is Google’s End Game For Fiber?

The Best Creative Fundraising Idea For Your Church Or Mission