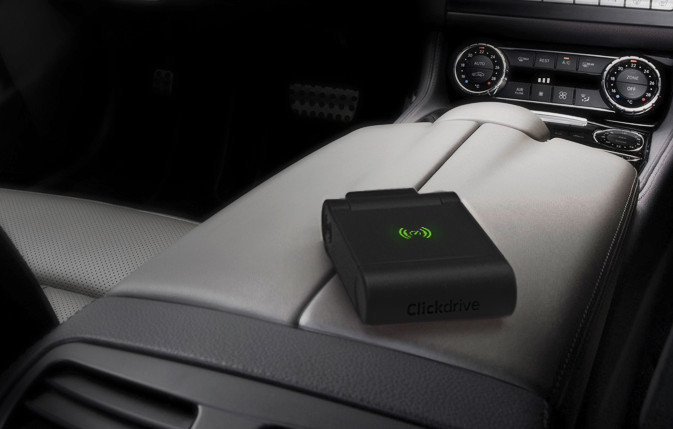 The digital revolution — development of increasingly specialized mobile applications — has changed the way we think about everything from retail to exercise, and cars are not immune to this shift.

The latest models boast voice-recognition software and real-time GPS mapping. Soon, cars will be parking themselves.

In many respects though, the auto-industry has yet to maximize the potential of mobile technology.

Clickdrive is hoping to change that.

“After experiencing issues with my own car, I was personally inspired to create a solution to the lack of data available on my car,” says former Lehman Brothers trading systems designer and Clickdrive founder Mark Sutheran. “Wifi and highspeed networks have become ubiquitous, but why aren’t our cars taking advantage of the situation?”

Clickdrive is a mobile hardware device that connects to Wifi and the mobile-web, linking 95% of cars on the road today — and all new models — to the cloud. Applications work with mobile devices to give users various up-to-the-minute data sets regarding their vehicles. So far, the apps the design team is promoting include a fuel-saver and blackbox, but the software platform will soon be opened to the public, according to Sutheran, giving the Clickdrive box as much potential as the collective imagination can support.

A $269 donation is the going cost for an early-bird shot at this 1Ghz CPU, 512MB RAM device, which comes equipped with an accelerometer, compass, GPS, and wi-fi for syncing with mobile devices and cloud storage centers. “We have installed a number of apps on the device, but the real game-changer is that the device provides the technological infrastructure to run new or custom-made apps to improve your car’s performance,” says Sutheran.

Ultimately, what Clickdrive is hoping to sell is that same potential to transform a stupid box of churning parts into a intelligent, modern, interactive technology.

4 Things To Consider When Building Mobile Apps For Businesses

Galaxy Note 9 What To Expect: Taking A Look At The Next Galaxy Flagship