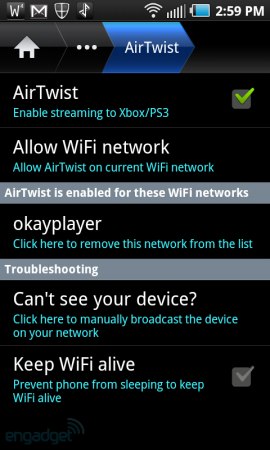 doubleTwist has announced the availability of AirTwist on its popular Android app, the doubleTwist AirSync. The new update lets users to stream in multimedia content to a connected Xbox or PlayStation 3.

Once updated, the doubleTwist app will feature the users’ device on the Xbox or PS3 and, a simple selection of the device would let them to enjoy media on the big screen almost instantaneously. The AirTwist option can stream in photos, music as well as videos. The doubleTwist app forms a powerful platform running on Android, Mac and Windows and the recent addition of AirSync to the app had increased its potentials with the added option to wireless synchronization. And now, the AirTwist further heightens the platform by unlocking the power of living room devices.

For all devices running on Android 1.6+, the doubleTwist AirTwist is available as a free upgrade from the Android market. It will soon be available through Verizon and Amazon app stores and to add-on, doubleTwist has confirmed that the app will be supporting devices like  those running on DLNA in the near future.

Magical Benefits of Investing at an Early Age

Ramp Up Your Home’s Curb Appeal