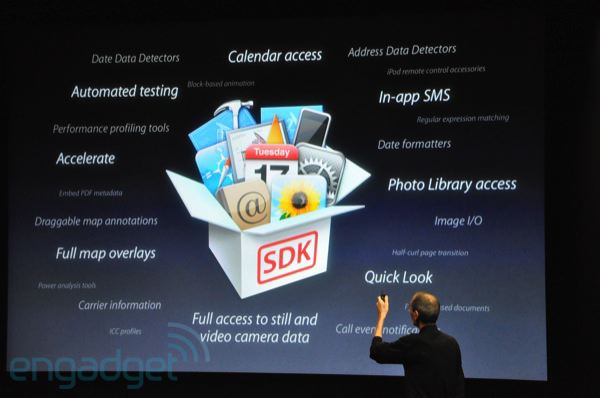 iPhone OS 4.0 will be released starting June this year and it can be safely expected that many apps and features will be added. These are eight features that make iPhone OS 4.0 a significant release, that’s worth an upgrade:

1. Multitasking
Those smart heads in 1 Infinite Loop have finally figured out that iPhone OS 3.X lacks an important feature available in other smartphone OSs and they have answered our prayers with the next major upgrade of the iPhone OS. Just press the Home button twice to show a list of applications that are active in the background.
When you are using a music player, you can let the music flows while reading an e-book. If you’re playing a game, it’ll pause when you want to reply a text message.

2. Folders
It is now possible to sort the applications into folder. This may not be a ground-breaking stuff; however it is a huge improvement in terms of practicability. Instead of a clutter of application icons on the screen, now you can organize them in a few folders. The current iPhone version only allows 180 apps on the home screen, but with those folders you can quickly access thousands of apps. Those folders can even auto-name themselves or if you like it, you can set a more appropriate name. They can also be dragged to the dock for easy access.

3. Better E-mail Management
The new OS uses a unified box to gather your e-mails in a single location. You can now use multiple Exchange accounts. iPhone OS 4.0 allows you to quickly switch inbox between each account and to participate in threaded conversations.

4. iBooks
iBooks platform will be available on the iPhone as well. It will be mostly similar to the iPad version and you can also access the iBooks store. Luckily, Apple allows you to buy a book from one device and use it on another. So if you bought an e-book for the iPad, you can transfer it to the iPhone. However, it is debatable how much fun you can get when reading books on that smaller screen.

6. Game Centre
Social gaming network will be available for the iPhone. It is rumored that Apple will roll out multiplayer networks like Xbox Live or PSN by the end on 2010.

7. iAd Advertising
At last, Apple makes use of Quattro, a mobile advertising company, which was bought a couple of months ago. The concept of iAd, is that instead of using links to external Web sites, sellers can showcase their products inside the application, which will allow buyers to browse more products.

8. Custom Wallpaper
This new feature maybe the least advanced, but it will have a significant impact on the iPhone’s appearance. Users will have the ability to choose custom wallpapers, a very common feature in many cell phones, which is available even in cheaper, non-OS models. People have become so accustomed with it in other devices that they may not be too excited any longer.

Now comes the bad news, older devices, such as iPod Touch (2nd gen.) and iPhone 3G won’t get multitasking, but they can still get many of the iPhone OS 4.0 features. Only iPod Touch (3rd gen.), iPhone 3GS and iPad will get full update. Let’s pray that Apple will have a change of heart, though it is unlikely due to hardware limitations in older devices.

I am Susan Hannan from Exams Key; it gives 100% E20-324 test exams. Let’s take benefit of CSSBB test Exams material efficiently and get guaranteed success. Check out free demo of all certifications Exam.