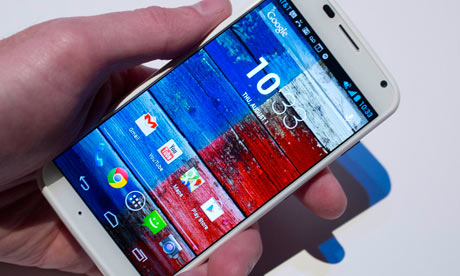 Google has announced to launch a self-driven Smartphone that would contain some outstanding features. Moto: X, the outstanding Smartphone is designed in such a way that it would handle by permanent listening mode. In addition to this, the source revealed that Moto: X is able to forecast weather or dial a number according to voice command. According to the source, the new handsets will be marketed at the end of August or in the early September. However, the owner has planned to sell it in Canada, the United States and Latin America. The company has no plan to export the advanced handset to Europe immediately.

The internet company is using similar technology to the Google Glass spectacles to generate the advanced phone that as informed by the reliable source, can be controlled by keeping hands free. In order to active a function, the user just require to tell the desired command.

In a statement, Dennis Woodside, the chief executive of Motorola told that like the self-driving car, Google is also the first to launch a self-driving phone. The co-founders of Google, Sergey Brin and Larry Page followed the business strategy and model that proves to be effective to offer success to Apple. According to information, the co-founders of Google combined the hardware and software creation under one roof to produce Moto X that is even regarded as the most high profile effort of Sergey Brin and Larry Page.

In this Smartphone, Google has tried their best to thrust the limit of voice control already being offered by Apple. In addition, Moto X also would act in response of motion. Sources revealed that high sensors linked to the camera of phone will become activated just by two twists of the wrist. Moreover, it also allowed the user to trigger the shutter of the camera just by touching any part of the display.

All the above features allow Moto X to offer superior service than that of Apple device that although offered voice commands through an innovative Siri application, has some limitations. Moreover, the users have to turn on the program by pressing the home button. In addition to this, Apple is also criticized for the limited integrity with other application of the phone.

Unlike Apple that allowed Foxconn’s assembly plants in China to provide assistance in production that has led to the acquisition that untrained and poorly treated staffs manufacture the phone, Google decided to produce and assembled the advanced phone in a factory owned by Motorola. They have laid stress to manufacture the latest equipment under the banner of “made in America”. This decision of Google has created a sharp contrast with that of Apple.

Francisco Jeronimo, IDC analyst is of the opinion that the handset is going to be the latest inclination of the next year. He believed that in order to experience entirely new feelings with bigger screens and voice control, users would like to replace their old smart phones and would prone to buy the new Moto X.

The cost of new handsets featuring 4.7-inch screen and 10-mega pixel camera ranges from $199 onwards. However, Google has also planned to offer customized service to the users, in which the users would be allowed to select front and back case color and many other features through online service named Moto Maker.

Why Devops Training Is Needed At Corporate Level