How to Create Windows Activation BackupsPosted by Gabriel MOn May 16, 2013 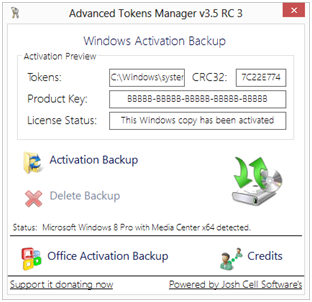 One of the most common issues reported by Windows users is related to the limited number of reactivations for the operating system, even if this is reinstalled on the same physical system and the hardware is completely unchanged.

Normally Microsoft imposes a limit on the number of online activations, after which you must contact the company by phone in order to be able to re-activate the operating system in the event of a re-installation. This can be avoided without affecting the operating system by copying certain operating system files and restoring them after reinstalling Windows. The method is perfectly legal, and was initially designed for business managers who have to reinstall the operating system on multiple computers at the same time, buy any user can take advantage of it. Read on if you want to see how this can be done.

Advanced Tokens Manager – the tool you need for this purpose

Advanced Tokens Manager is a very easy to use tool which helps users activate a copy of Windows and also provides restoration of the activation after reinstalling the same version of the operating system on the same machine, without the need to reactivate online or by phone.

The program can make a full backup of the data the operating system needs to establish that the computer was previously licensed with the same version of Windows. This is not a solution to pirating Windows and will work only with valid licenses, associated to a single system that is running Advanced Tokens Manager!

Some of the features of this tool are as follows:

The tool is straightforward and easy to use. All you need to do is download it and follow the instructions.

Windows 7 Features that You Will Not Find In Windows 8

How to Find Geophysical Instruments?