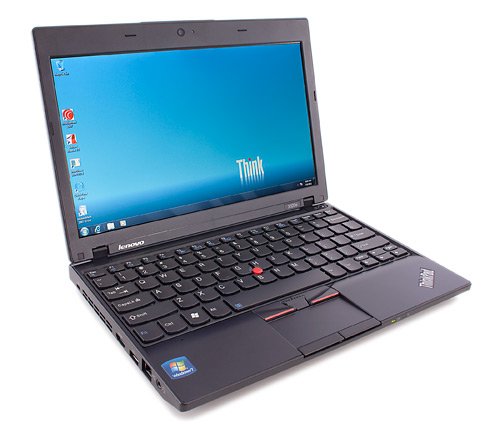 Years ago, people were going crazy over the Intel Atom. These days, however, it is a different story. Business netbooks like the Lenovo ThinkPad X120e no longer look to the Atom for processing power. It, instead, relies on AMD’s Fusion APU. The ThinkPad X120e also has tons of tricks up its sleeve.

The design of the ThinkPad X120e is rather blunt. There is an obvious lack of color, glossy finishes or even patterns. For typical consumers, they would be turned off. This is not the case with corporate consumers though. Simplicity is of utmost importance in their world and this netbook would be a fitting tool in their industry.

The netbook weighs 3.3 pounds. This is above the average if you are looking at 10-inch netbooks. The ThinkPad X120e, however, has an 11.6-inch screen. That means that it is lighter as the average for netbooks of that size is around 3.5 to 4 pounds.

A screen size larger than 10 inches means that it can handle a resolution of 1366 by 768.This is great as the casual user can use it to view 720p videos. Likewise, corporate users can present their data better due to the high quality display. Unlike other netbooks, glare is not experienced on the ThinkPad X120e due to the matte screen it has.

The keyboard has a standard Chiclet layout which offers a superb typing experience. Lenovo did a good job in designing the keyboard and mouse. Present still is Lenovo’s signature touchpad, mouse buttons and pointing stick. Clearly, this netbook is designed to be comfortable to work on.

The ThinkPad X120e had a predecessor called the X100e. That netbook lacked something which is improved upon by the X100e. The feature that was lacking is the HDMI port. Now, users can easily send their video output to any projector, HDTV or LCD screen that supports HDMI.

The processor of the ThinkPad X120e is the 1.6Ghz AMD E-350 which is better than the Atom in many ways. It also has 4GB of DDR3 RAM which makes it one of the fastest 11-inch netbooks available on the market. The battery of this netbook is rated at 57Wh. Despite being smaller than the one of its predecessor, it still managed to last for 6.5 hours. The ThinkPad X100e only lasted 5.5 hours with a 63Wh battery. This goes to show that this netbook is more energy efficient. If given a 63Wh battery, it would have likely lasted 8 hours or more.

How To Reduce Noise In A Learning Environment

Why Buy a Kindle Paperwhite