Major Activities of an Operating SystemPosted by Gabriel MOn May 18, 2013 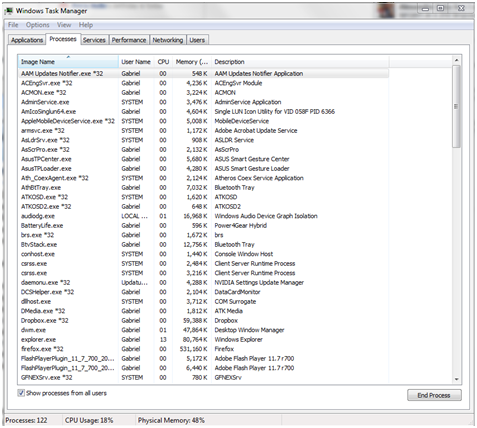 Whether you use Windows 7, Mac OS, Linux, or even still manage to handle MS-DOS, you use an operating system and the core functions are the same. The only difference between these operating systems is the interface. However, from the perspective of computer science, operating systems are designed to perform some main tasks, all referring to supporting communication the programs and access to hardware control.

What is an operating system process?

Whenever you start a program, it creates at least one process. In terms of operating system, a process is an instance of a single program, although software can generate more than one process. Processes are generally running in two “spaces”. First of all, there is the user space, where processes can be switched on and off without affecting the stability or system performance and system space, where processes are protected. If you open Task Manager in Windows, you can click the “Processes” tab, where you can see the processes currently running in the operating system. System processes are marked with “System” and user processes with the name of the user running the process, as shown in the screenshot below.

Your system has a finite amount of memory. In reality, it has more memory levels, some on the processor and system RAM, each with different properties and access speeds. Memory Management keeps data referring to data stored at a particular memory address, as well as memory that can be erased and rewritten. Much of memory management is about predicting future information the operating system will need, along with optimizations that can make transfer to and from memory faster. This is one of the main activities of the operating system.

Location tracking of files stored on a permanent storage device such as hard disk is part of the management function of the file system. Windows does not only retain the directory structure for each file. It also covers information such as permissions and what processes have control over a certain file.

How To Effectively Cure The College Acne Blues

All You Need To Know About Import Export Code In Delhi

5 Easy Tips to Save Money for your future Growth