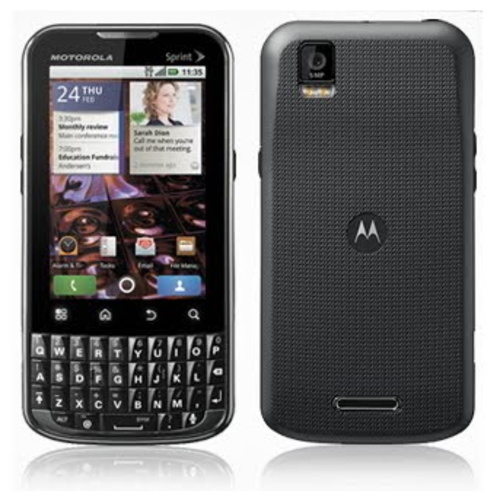 The good news for the Sprint users is that, they have launched their own version of Motorola XPRT. This phone is aiming to target the business class people. The phone gives the solid and comfortable feel to hold in a hand. It is of 145 grams of weights and measure is 21 by 120 by 13 mm. It has TFT display of 3.1 inches and 1 GHz processor.

The screen display is too much shorter with 320 by 480 resolutions. But, by rotating the phone sideways, users can get the extra space. The keyboard is with slanted keys that are coated with the light matte. The phone is designed with the touch screen, so, that those people who cannot hold the keys for the long time can directly use the touch screen for entering the numbers.

With 1 GHz TI OMAP processor, Motorola XPRT allows users to avail the fastest speed. The phone can run dozens of applications without affecting the speed and performance of the phone. The ROM of the phone is of 2 GB; out of this 2 GB, 0.95 GB is available for storing the applications. The phone has 2 GB micro SD card. This can be increased up to 32 GB.

The software of Motorola XPRT is android 2.2. The interface is very obvious for those users who have used the Motorola Android phones. The application launcher, Icons for the phone and the contacts reside at the bottom of the home screen. The software includes the applications of Sprint like Music Plus, Football Live, File Browser, Latitude, media Share, Manage SIM card, DLNA, Google Books, Radio, Zone, TV and Movies, mobile Wallet and Worldwide.

Motorola XPRT comes along with the dual camera. The camera is of 5 megapixels and it can support the dual-LED flash. The video size of the camera is 720 x 480, this size add details and easily passable to other devices.

Motorola XPRT is the globetrotters or the world phone. It means that users can use it anywhere around the globe and it will not need to be switched off, overseas. The price of the phone is quite reasonable and affordable. It is $129 with 2 years of contract. Users can enjoy many features over this phone and can take benefit of its high pixels.