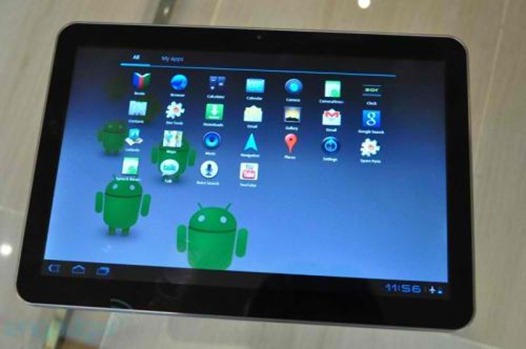 Tech consumers have seen a number of tablet computers released after Apple spat out its iPad, and other manufactures aimed to ride the waves it made on the proverbial puddle. Samsung did just that, but their goal was to ride the waves AND make their own ripples with the Galaxy tab 10.1.

Apparently, a lot can be said about the Tab 10.1 compared to its more mainstream peer. As many tech consumers might know, the Apple OS on iPhone, iPad and iPod Touch is not very “tweak-able”. It imposes relatively the same design on every other Apple device on running iOS and doesn’t give the user much freedom when it comes to customization. This is where much of the Tab10.1’s appeal comes into play. With the new Android honeycomb 3.1 operating system, the Galaxy Tab 10.1 lets you mold your device into a whole new creature with its flexibility and non-restraining interface. The Tab 10.1 lets you adjust it according to your habits and personality as it should be, and not the other way around.

The Tab 10.1 runs on the new nVIDA Tegra 2, which is a dual-core 1 GHz processor; it certainly makes it more attractive that a graphics card company makes the Tab’s processor. The ipad 2 falls short of the Tab 10.1 in terms of RAM where it has just 500MB and the Tab has 1 full Gigabyte of ram, which does make the Tab perform faster and transition much smoother from screen to screen. The display size on the Tab is 10.1”, as its name suggests. It is 0.4” larger than its Apple counterpart and may seem like a minute difference, but hands-on experience will teach you that it really is otherwise. It is the lightest tablet on the market with a weight of just 19.9 oz and is as thick as 0.34”.

The only downside of the Tab 10.1 is that it does not include a memory card slot, which makes it impossible to expand memory. This might be a major turn off for users who love to stuff a load of movies into their media devices. If that is indeed the case, you might be better off buying the ASUS Transformer which is thicker and heavier than the Tab 10.1, but features an SD card slot for expandable memory. Weight, however, would matter a lot to the student or businessman who will prefer a device that is compact and light. The Galaxy Tab 10.1 is available now for $499.

Are Dedicated Servers Worth It?